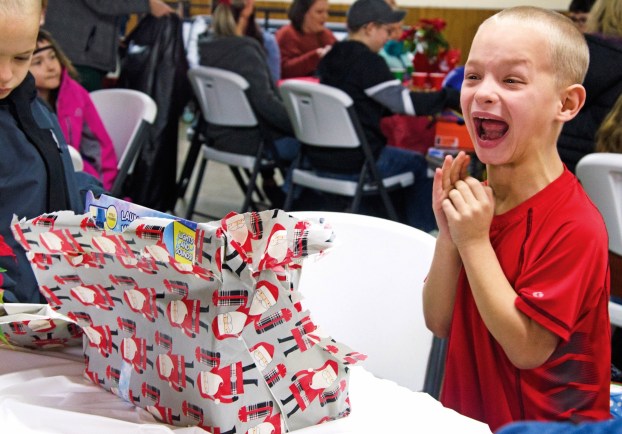 Caleb Van Winkel is ecstatic as he opens a present he received at the Christmas party organized by South Point honors students on Wednesday. (The Tribune | Heath Harrison)

The joy of giving: Children get early Christmas from SP honors students

SOUTH POINT — Christmas Day was a week away, but some children got to celebrate early and brightly on Wednesday afternoon.

A party took place at the South Point Community Center, treating the children to pizza and a visit with Santa and Mrs. Claus.

He said 28 children, who came from families in need, were selected and were first taken to Walmart, where they shopped for necessities like clothing.

Then the bus arrived at the community center, which was decorated for the event.

“I hear we have a visitor coming,” Kent Stewart, a history teacher and advisor for Rho Kappa told the crowd, as Santa and Mrs. Claus entered, surprising the children.

They were followed by the honors students, who carried bags full of toys, purchased according to the children’s wish lists to the stage.

Then, each child’s name was called to receive their gifts.

Stewart, who along with Mu Alpha Theta advisor Alex Hunt, helped organize the event, said the students had raised more than $9,000 for the effort.

“We call it the Christmas Project,” he said, stating it had taken place annually for 17 years.

Nance said several anonymous donors had contributed more than $1,000 each to the funds.

One junior taking part in the event was Nicole Barker.

She said , seven years ago, she was one of the children who was helped by the effort.

“When I was little, it gave me hope,” she said. “It was positivity. And we got clothes and things we wouldn’t have had. It helped me to become a better person myself.”

She said she helped the child assigned to her pick out clothes and then got toys for him.

“It made me happy seeing him be happy,” she said.

Stewart said the event was about “giving the joy of Christmas to the children wouldn’t otherwise it.”

“And the students spend their own money if they go over,” he said. “Without question.”

He also said they made every effort to shop locally.

“The money is put back into Lawrence County,” he said.

Stewart said the group wanted to thank Giovanni’s Pizza of South Point, Cindy Chinn, of Big Sandy Superstore, United Way of the River Cities, South Point High School alumni, and the student council for their donations, and People for the Point, for use of the community center.

Surveying all the open packages and stray wrapping paper on the floor near the end, he summed it up.

“It’s chaos right now,” he said “But it’s completely worth it.”