Ironton looks to use depth to overcome late start on season 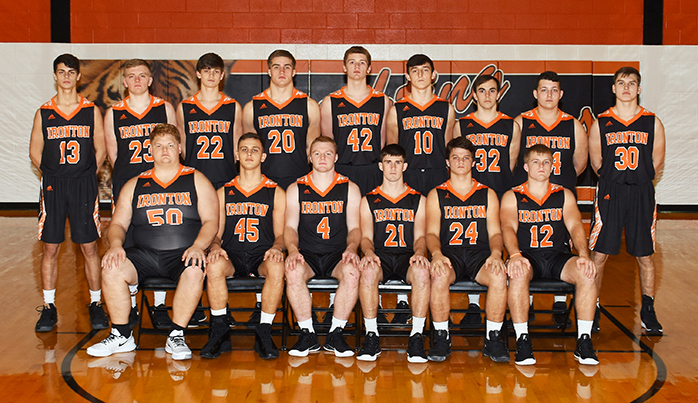 First-year Ironton Fighting Tigers’ head coach P.J. Fitch has a lot of numbers, but the one number that’s lacking is the biggest concern.
The number of years of experience.
“We’ve got a lot of juniors and seniors, but at the same time not a lot of experience,” said Fitch who has a 144-78 record over 10 seasons as a head coach at Beaver Eastern and Latham Western.
But Fitch is hoping to turn Ironton’s depth into a major component to help Ironton be successful after losing three starters from last season’s 18-7 team.
“Depth is probably our biggest strength. We’ve got depth, not so much in the post area, but we’ve got a lot of athletic kids who can play two, three, four where if we extend the floor we can really get up into folks a little bit,” said Fitch.
“We don’t really have much of a drop off with three through eight or three through nine. We’ll try to develop our pressure package and rotate a lot of bodies in.”
Heading the group of players who can give Ironton some speed and defensive pressure are 6-foot senior Collin Freeman, 5-11 junior Cameron Deere and 5-10 junior Kyle Howell.
Ironton is looking for a point guard now that four-year starter and All-Ohio selection Ethan Wilson has graduated. Wilson also takes with him more than 1,000 career points.
Fitch is looking to 5-10 senior Jordan Grizzle, 6-2 junior Trent Hacker and possibly 5-8 freshman Landon Wilson, Ethan’s younger brother, to fill the position.
“We’ve got two or three kids. Grizzle, of course, Trent Hacker has been giving us some minutes there, and we’ve got a talented freshman Landen Wilson and he’s more of a natural point guard but he’s a freshman,” said Fitch.
“We don’t have anyone guy who can replace the point guard play that they had last year, but we’ve got multiple guys who can be effective.”
The wild card at guard could be 6-1 senior Gage Salyers who hasn’t played since middle school but has already shown flashes of the ability to be a key contributor.
“Gage has really surprised me. He’s very athletic, strong, he’s rusty, naturally, so he’s not shooting the ball that well just yet. But he’s such a good athlete that folks will be surprised by the end of the year the kind of player that he is compared to the beginning,” said Fitch.
Replacing second team All-Ohio guard Charlie Large and his 19.5 points a game is crucial. Fitch doesn’t expect one player to fill the void but rather use several players.
The top shooting threats are 6-2 junior Erickson Barnes, 6-2 senior Brayden Easterling and Grizzle.
“Jordan Grizzle is a pretty solid shooter. Erickson Barnes is a shooter and we’ve been working hard with him. Brayden Easterling is a very solid shooter when he gets his feet set. Outside of that, we really don’t have anyone right now,” said Fitch.
“But as a whole, I think we’ve got enough shooting that teams can’t double down inside on Reid (Carrico) and (Trent) Milleson.”
The 6-foot-3 Carrico has started the past two seasons and averaged 11.5 points and 7.8 rebounds last year as he was named to the Southeast All-District team. The 6-2 Milleson is another senior who played extensively last season.
Fitch is also hoping that 6-4 junior Caleb Hopper will be able to play remains sidelined with an injury.
“Reid’s a year older, a year wiser and a year stronger. If he gets the ball in position, especially for most teams in our conference, they’re going to have a hard time stopping him,” said Fitch.
“Trent Milleson has really worked hard. He may not be as athletic as Reid, but in terms of basketball skills, he can go right or left and he can go out and shoot the basketball from the 3-point line. I look for Trent to have a real solid year for us.”
Fitch — a four-time Southern Ohio Conference Coach of the Year along with an Associated Press coaching award — has only had his team for about a week due to most of the players being on the state runner-up football team.
He said that toughness in football has carried over into basketball and it’s something that Fitch likes.
“We’ve only had everyone for a week, but we’ve got a tough group of kids who like to compete and push one another. We have a roster with a lot of athletes on it. We may not be as basketball skilled as other teams in the area, but we certainly have speed and we’ve got muscle and we’ve got the Fighting Tiger attitude,” said Fitch.

Swartzwelder honored for his lifetime of athletic contributions

Mike Wirzfeld (right) presents a plaque to Ironton resident Dave Swartzwelder honoring him for his lifetime achievements and contributions for... read more