Swartzwelder honored for his lifetime of athletic contributions 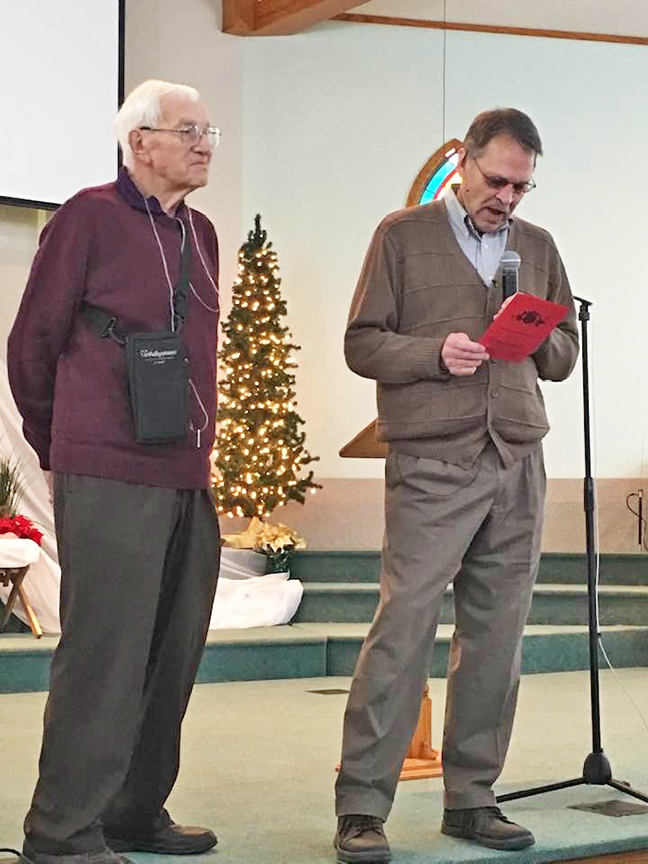 Mike Wirzfeld (right) presents a plaque to Ironton resident Dave Swartzwelder honoring him for his lifetime achievements and contributions for both athletics and community service in the Ironton area. (Photo Submitted)

When President Teddy Roosevelt once said “Walk softly and carry a big stick,” he could have easily have been talking about Dave Swartzwelder.
The left-handed batter was known for his rocket shots down the first base line during his baseball playing days at Coal Grove and later in the softball leagues in Ironton and the area.
But Swatzwelder was like a gentle giant who was friendly and helpful, except when he was batting and then he went from Dr. Jekyl to Mr. Hyde.
In recent years, Swartzwelder has been helpful assisting in the annual 5K Memorial Day Run in Ironton and raising scholarship money for veterans.
Last Sunday, Swartzwelder was honored for his accomplishments in the athletic world and his lifelong contributions to the Ironton area by his church, First Church of the Ironton Nazarene.
In high school, Swartzwelder was co-captain of the football team, captain of the basketball team and in baseball he not only was an outstanding hitter with great power, he pitched and averaged two strikeouts an inning.
He was voted “Most Sports Person” and lettered in all three sports.
It was Swartzwelder’s love of sports that led him to team up with his good friend James “Pee Wee” Gibson to revive the Solvey Softball Field — currently the Ironton youth soccer fields.
Swartzwelder drove his father’s tractor with disc from their farm on State Route 243 in South Point to Ironton where he and Gibson worked endless hours until the field was in pristine condition.
Upon completion, the field was used for many years by the Ironton Recreation Department for youth league and adult softball leagues.
During his post-high school career, Swartzwelder was one of the big bats in the lineup for the famous Art’s Superette men’s softball team as well as Malone’s Mobile Homes, Bob Linn Sporting Goods, Ironton First Church of the Nazarene and West Ironton Church of the Nazarene.
Art’s Superette dominated not only the Ironton men’s league but throughout the Tri-State and the team was very successful in tournaments wherever they traveled throughout Ohio and other states.
When the recreation department was still playing at Beechwood Park, fans would fill the stands to watch Swartzwelder crush home runs well over 300 feet into the middle of the football field.
When the leagues began to dwindle and fold, Swartzwelder continued to playing in senior leagues.
Playing in the Old Timer’s League, Swartzwelder’s team won the state tournament for the 35-and-older division. As he grew older, his swing was still powerful and he joined the International Senior Softball Association (ISSA) and his team won the World Championship held in Manassa, Va., where Swartzwelder was named the tournament’s Most Valuable Player.
In 2004, Swartzwelder was inducted into the Tri-State Sports Baseball/Softball Hall of Fame. He was named the “Best Offensive Player” in the All-World Team 65-and-older Division.
While playing for West Ironton Church of the Nazarene, he was honored for collecting more than 700 career hits.