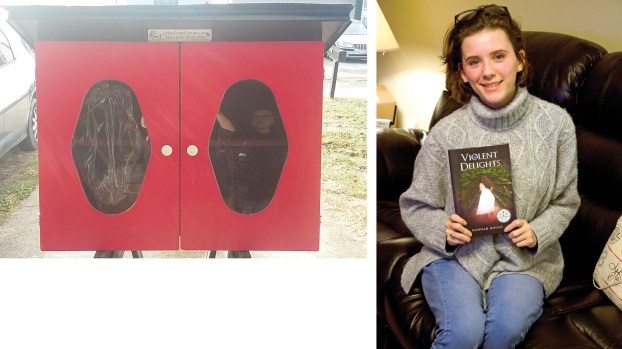 Hannah Boggs, 18, of South Point, is the author of “Violent Delights.” Boggs, a senior with Ohio Connections Academy, just finished her second work in the planned trilogy of books, and expects it to be released in coming months. (The Ironton Tribune | Heath Harrison)

SOUTH POINT — Hannah Boggs is set to graduate high school in the spring and she already has two accomplishments most adults do not.

She recently completed her second novel and is in the process of editing it, with release expected soon.

Boggs, 18, the daughter of Janette and David Boggs, completed her first book, “Violent Delights,” at the age of 16.

Its title comes from William Shakespeare’s “Romeo and Juliet,” and the name of the second installment, “Fire and Powder,” of the trilogy she has planned, will as well.

Boggs describes the first novel as “a supernatural thriller.”

“It’s a young adult book,” she said. “It is about a 17-year-old who is sick and moves across the country. In her new town, she meets two famous magicians who draw her into her world and turn it upside down.”

She also provides her own cover art for the series, using her best friend, Rebekah Coster, as the model for the photographs.

Boggs has self published the work and sold it online at www.hannahboggsbooks.com, and locally at stores like The Inner Geek in Huntington.

She said the reception has been great and many readers have left her five-star reviews.

“A lot of people bought it and told me they loved it,” she said. “It’s been very positive.”

She has also drawn rave reviews from some in the literary world.

“I have been in book publishing more than two decades and seen, read and worked on more than 80,000 books,” Jon Fitch, the CEO and founder of Accurance, a book production company for authors, said. “Hannah Boggs’ work shows so many signs of pure talent at such a young age.  I can honestly say I have never read any work by such a young author that was better quality that this. The settings, development of character and style reflect what should be decades of writing experience, but they show up here in a young lady of just 16.”

Boggs is a senior with Ohio Connections Academy, an online school. She had previously attended St. Joseph Catholic School in Huntington, but had to withdraw in middle school due to health reasons.

Boggs said the experience played into her work.

“The first book came to me around the time I got sick,” she said. “I was venting my frustrations and really felt isolated. I put it into words and turned it into a story.”

Boggs said she had been into writing since she was a child, but really focused on it, beginning as a teen.

“I was always telling stories and making up stories,” she said. “I really only started writing in middle school, but the want was always there.”

She said she did not have an extensive education, as far as crafting a novel, but her schools had some writing workshops.

“I was kind of naturally drawn into it,” she said. “We wrote some poetry, and some people would read that and say, ‘Wow, you wrote that? It’s really good.”

Boggs said the biggest influences on her work are classic books.

“Those interest me,” she said. “Gothic horror, like Frankenstein, Phantom of the Opera and Dracula. I wanted to write a modern version and take elements of those stories.”

Boggs enrolled in the Ohio Connections Academy as a sophomore and has completed her high school credits.

“She’s finished,” her mother said. “And she’ll walk for graduation in the spring.”

Boggs said she plans to attend Shawnee State University and major in business.

“I want to run and own a book store,” she said.

Boggs recently spoke at the Ohio Statehouse regarding OCA and e-learning.

“My school asked me to be an online ambassador for Legislative Day,” she said. “I spoke about online school and how it had benefitted me.”

Boggs has also taken her love a reading and put it into another work. She recently built a free library box, to be installed on County Road 1, as part of her Honor Society project. It will be stocked with books for people to borrow and trade out.

She said she plans to continue writing once her trilogy is finished.

“I’m hoping to branch out at least a little,” she said. “And do something more dark and thriller-oriented.”

Boggs said she enjoys all the positive feedback and that it is good to see her work appeal to others.

“I wrote it for me and, if someone else enjoyed it, that’s great,” she said.

Herb Brown and his wife, Laura, portray Samuel and Eliza Dempsey in the 2019 Historic Walk by the Lawrence County... read more