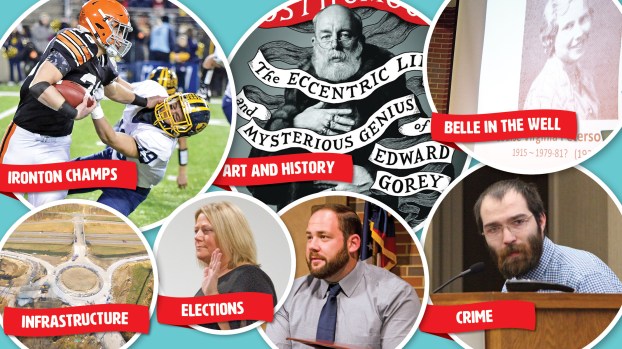 The following are the top 10 biggest stories of the year, as voted on by the editorial board of The Ironton Tribune:

The Ironton Fighting Tigers headed to Canton to face off against the Kirtland Hornets on Dec. 7 in the Ohio High School Athletic Association Diction 5 championship football game.

It was Ironton’s first championship game since 1999, when they played Sandusky Perkin.

While the Tigers came up short, defeated by Kirtland, 17-7, they still captured hearts and excited the people of Lawrence County in winning the silver trophy.

The year saw shake ups in governments across the county, including a sea change in Ironton.

• Sam Cramblit defeated incumbent Mayor Katrina Keith in a landslide vote, 70.4 to 27.95 percent. Keith had filed a challenge against Cramblit, contesting his residency, but the complaint was dismissed by both the Lawrence County Board of Elections and the Ohio Supreme Court.

There were other mayoral changes in Lawrence County in November.

• While in Chesapeake, the results were tied between the top two candidates on election night. After provisional and absentee ballots were counted 10 days later, Kim Oldaker defeated incumbent Tommy Templeton to become the village’s first female mayor.

• A funding levy for Lawrence County Developmental Disabilities was narrowly defeated in November. Following the vote, organizers got a new proposal placed on the coming 2020 primary ballot.

Facing the death penalty, Lawson chose to have a trial by a panel of three judges rather than a trial by jury. On Feb. 25, Lawson was sentenced to death in all four aggravated murder charges and on other charges. Lawson was also sentenced to a total of 59 years and six months in prison, which included extra time added on for gun specifications on a number of the charges.

• In December, Belinda Adkins, who shot her ex-husband, Joshua C. Jones, to death in the parking lot of the South Point McDonald’s, pleaded guilty rather than go to trial on Dec. 16. She was sentenced to life in prison and will not be able to take her case to a parole board before 2041, after she has served a minimum of 20 years on aggravated murder and three years for using a gun in the crime.

• Spanish Smith will spend the better part of six decades in prison for dealing illegal drugs in Lawrence County. On Sept. 26, the 29-year-old man was sentenced to 54 years in prison. Lawrence County Prosecutor Brigham Anderson said that he had asked for a sentence of 54 years and that he felt it was an appropriate sentence since Smith was trafficking large amounts of heroin, methamphetamine and fentanyl before he was arrested by the Lawrence County Drug and Major Crimes Task Force in February.

4. BELLE IN THE WELL

After 38 years, the real name of the “Belle in the Well” was revealed.

In April 1982, two girls were exploring in the woods around Dobbstown and opened up a water cistern and found the body of woman. She remained unidentified for years. There was no wallet and no identity card. There was a three-year-old bus ticket and a key to locker at the Huntington Greyhound station.

This year, a DNA match confirmed she was Louise Virginia Peterson Flesher, who was 65 years old when she was strangled to death sometime between late 1979 or early 1980. Flesher was born in Fairview, West Virginia, some three hours from where she was found near Chesapeake.

She was estranged from much of her family who didn’t know anything about what had happened, except that she had stopped cashing her Social Security checks.

The only photo investigators could find of Flesher is her graduation photo from 1934. At some point, she was living near Las Vegas and sometime between 1979 and 1981, she came back to this area.

No one knows who strangled her or put her in the well.

The year saw several political changes, which were not connected to the election.

• First, Ohio Rep. Ryan Smith, R-93, announced his resignation, taking the position of president of the University of Rio Grande.

The state’s Republican Party then chose Lawrence County Auditor Jason Stephens from a slate of candidates to serve the remaining year of Smith’s term. Stephens will run for election to the seat in 2020.

• As a result, the auditor’s office needed filled. First, former Chesapeake Mayor Dick Gilpin was chosen as interim auditor, serving for about a week until the county’s Republican Party chose Rock Hill School Board member Paul David Knipp to fill the seat. Knipp will need to face voters in 2020 to retain the position.

• Lawrence County Commissioner DeAnna Holliday also announced a change, switching her party registration from Republican to Democratic. Holliday, who was elected in 2016, will seek a second term in 2020.

2019 was a good year for festivals, whether the events were music-based or fan-based.

• The first-ever Ohio River Revival kicked off on June 29. It began in the morning with yoga and then for the next 12 hours, 10 string bands performed at Ironton’s waterfront.

The event was free and created by Bob DeLong, the founder of Appalachian Uprising, to bring a new music fest to Ironton.

• In October, the second annual Wizardfest returned to the streets of downtown Ironton, bigger than the first year.

This year featured three actors from the Potterverse movies and fans dressed as their favorite characters, while tents covered downtown and shops were turned into Harry Potter-themed spaces.

• And, in August, the first ever Ironton River Ride took place, with motorcycle-themed activities at city bars, and a family area that hosted a visit from the Cincinnati Circus. Organizers hoped to offer a replacement for the loss of the annual Rally on the River of past years.

There were two stories of note in 2019 regarding art and history.

• It was learned that the ashes of famed macabre illustrator and writer Edward Gory were interred at Woodland Cemetery in an unmarked grave after his death in 2000.

Gorey, who never actually resided in Ironton, has several generations of relatives, including his mother, buried at the cemetery, which serves as the family’s ancestral plot.

The artist’s final resting place was revealed in a passage of a biography in late 2019 and the news filtered its way back to Lawrence County in following months.

• Another reveal came when a piece of art made in Ironton fetched a high prince at an auction in July.

A 20-gallon, salt-glazed stoneware cooler sold for $177,000 at a Crocker Farms auction to Pennsylvania dealers. The piece, made by William Wilbur, of Ironton, around 1870, a record for an American-made face cooler and for Ohio stoneware.

There were several new business openings throughout the year.

In Ironton, The Vault Market opened on Center Street, with its founders, Abbie Keuhne and Amanda Cleary, offering a collaborative space for regional artisans and producers.

The Hutton Wayfarer Gallery held its soft opening in South Point before New Year’s and got under way, hosting guest artists, as well as featuring pieces from the more than five decades of co-owner Robert Hutton’s artwork.

Merle Norman moved to its new location, returning to Ironton’s downtown after many years, wile Fusion Nightclub opened in the renovated ballroom at the Elks Lodge.

New restaurants also opened, including the Armory Smokehouse in Ironton,  Bellacino’s new location in South Point and Taco Bell in Proctorville. An old favorite also returned, with the Shake Shoppe reopening under new owners in Ironton.

And the biggest reopening came at The Point industrial park in July, when officials cut the ribbon on the renovated 32,500-foot Keurig Dr. Pepper facility, which will distribute to more than 30 counties in the Tri-State.

Fires are always a concern and it took a grim turn this year after four people died in a fire in May in a house fire near Ironton.

Grandparents and two step-grandchildren who were staying with them on May 24 were killed in the blaze at their residence on Township Road 336 near Ironton.

Firefighters also discovered the body of their service dog, which appeared to have been attempting to alert the Taylors and the children who were all in their separate beds.

• Mayor Jeff Gaskin announced that $800,000 in grants had been secured from the KYOVA Interstate Planning Commission for South Point for the installation of sidewalks, a first the village. It was the largest grant for South Point in more than 30 years and construction is expected to begin in 2021. Funds were also secured from the Ohio EPA for the village’s sewer systems.

• In Coal Grove, the village will receive nearly $2 million in grant funds from the Ohio EPA to replace its water system. A $2 million loan was also secure toward the $4 million project.

‘Leaving a great legacy’: Brown remembered for dedication to community

A civic leader is being remembered for his dedication to the community in Ironton and Lawrence County. Herb Brown, of... read more