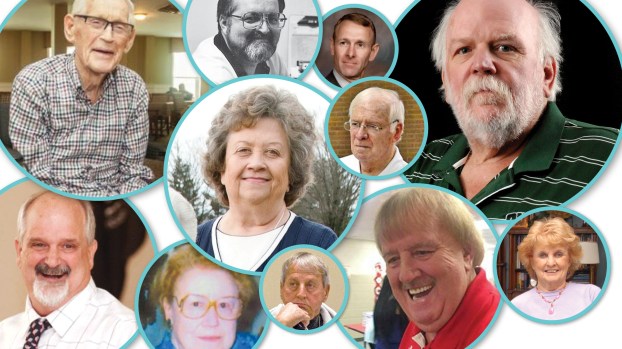 Lawrence County and the Tri-State said farewell to several people in 2019 who were known for their contributions to the region and beyond, leaving behind a legacy that will not be forgotten:

A longtime political leader of the Tri-State passed on March 15. Bobby Nelson, 84, served for two terms as Huntington’s mayor from 1986-1993 and was a former member of the West Virginia House of Delegates and state Senate who represented Cabell County. In his retirement from electoral politics, Nelson taught political science at Marshall University, was an activist for environmental causes and against mountaintop removal mining and was the host of the radio program “Tri-State Talk” on WRVC for many years.

An Ironton native, known as a trailblazer in the medical field, died on May 3 in North Carolina. Mary Argus, 94, was the first woman in the U.S. to earn a doctorate in cancer research and was a pioneer in her field, serving on the faculties of the University of Florida-Gainesville and Tulane University School of Medicine. She was author of “Voices From the Gathering Storm: The Web of Ecological-Societal Crisis” and contributed to numerous scientific journals.

A decorated former member of the military who worked as an educator and advocate for Tri-State veterans passed on May 12. Ret. Col. Ralph Newman, 78, of Grayson was a Vietnam veteran who worked with Ashland and East Carter high ROTC programs. In recent years, he had worked with organizer Delores Sarpas on the annual Pearl Harbor remembrance day ceremony at Kentucky Veterans Cemetery Northeast on the Industrial Parkway in Greenup County, where he served as keynote speaker.

Ohio University Southern lost a popular member of its family on June 13, when Steve Call, a former professor and school official, died at age 66. Call, who worked as a travel agent and wrote a weekly column on the subject for The Ironton Tribune, was a former college football coach and semi pro player and member of the Ironton Elks. He, along with fellow professor Bob Leith, was well known for organizing history field trips throughout the country for OUS students.

OUS suffered another loss on June 21, with the passing of former professor Jed Utsinger.  An instructor in computer science, mathematics and statistics, he was the school’s coordinator of research and computer sciences and was credited for technological improvements and initiatives, as well as workforce training on campus.

A co-founder and tireless worker for Wreaths Across America passed on July 13. Juanita Southers, 74, began the local project with the goal of honoring soldiers by placing a wreath on the grave of every veteran at Woodland Cemetery at Christmas. Her legacy continued this year when the group, working in her memory, finally fulfilled their goal. She was also an employee at Central Christian Church Daycare and the Lawrence County Board of Elections.

The matriarch of Ashland’s famous Judd family died on July 31. Pauline “Polly” Judd, 91, was mother to Naomi and grandmother to Wynona and actress Ashley. A former city commissioner, Judd was known as a colorful and friendly face in the region, a political mainstay and was described as “a firecracker of a woman” on her passing by state Sen. Robin Webb.

The South Point village council lost a member of their team on Aug. 13, when Bill Patrick died at age 69. A former transportation manger for the Ohio Department of Transportation, Patrick was in his first term on the council. He had focused his time on increasing transparency in government by working toward getting council meetings recorded, as well as seeking donations and organizing to bring improvements to the historic White Cottage Cemetery in the village.

A beloved figure to a generation of students in Lawrence County passed on Sept. 2. Keith “Beef” Roth, 65, was a bus driver for Rock Hill and South Point schools for several decades. He was deeply involved in improving education for the region, serving as a member of the Rock Hill school board and worked as a booster for the district’s band and athletics. He also worked as a senior campground host at Vesuvius Campground.

One of the county’s oldest residents died on Nov. 22 at age 101. Wyngate at Rivers Edge resident Mason Maynard celebrated his 100th birthday at the senior living community in 2018. Born in Wayne County, West Virginia, he spent most of his life in Crown City. He worked in the coal industry, where he was responsible for switching many mines to safer electrical systems to prevent explosions.

Many in Lawrence County received sad news over the holiday when Herb Brown died on Christmas Eve at age 61. The civic leader was involved in several community groups around town, such as the Lions Club and Knights of Columbus, coached soccer and was a fixture of the Lawrence County Museum’s annual historic cemetery and church walks. A longtime member of the Ironton-Lawrence County Memorial Day Parade Committee, he served as the event’s grand marshal in 2017.

PROCTORVILLE — The village council of Proctorville took time out of its regular monthly meeting on Dec. 18 to pay... read more