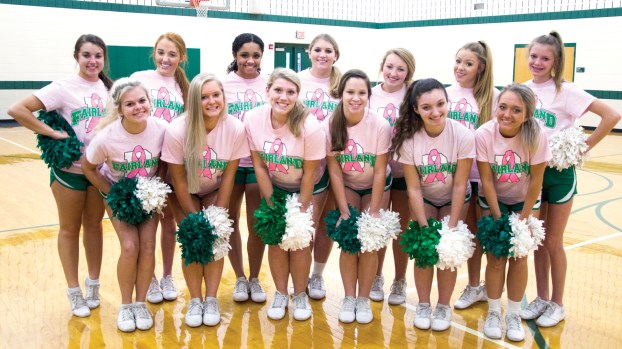 ROME TOWNSHIP — In February, Fairland High School’s cheerleaders will compete at the national level for the first time in 20 years.

The school’s team has qualified to compete in the 2020 UCA National High School Cheerleading Championship in Orlando, Florida.

“Fairland has not been to nationals since 1997,” coach Shawna Leep, who also teaches at neighboring Fairland West Elementary, said. “We are so excited!”

She said the team qualified after taking part in a regional competition in Louisville, Kentucky in November.

The team of 13, comprised of one senior, five juniors, four sophomores and three freshmen, will take part in the new Game Day Division, which Leep said will be based on “what cheerleaders do at ball games.”

She said they would start with a band dance.

“Then, they create a situation where our captain has to determine whether its offense or defense,” Leep said.

She said the captain would then determine the appropriate cheer, sideline and they would also perform to the school song.

As for preparation, Leep said the group is “staying busy.”

She said, in addition to performing at games, they have also been taking part in community service.

On the day of the interview, the team was set to follow up practice with a visit to NECCO, where they were volunteering for a Christmas event.

She said a lot of their time was being used for fundraising for the trip, to which the team quickly agreed on the need.

The event runs from Feb. 6-9 and Fairland is set to perform on Feb. 7. If they make it to the later portion of the event, they can be seen on ESPN, which covers the finals, Leep said.

She said, in addition to the competition, the team will also get a chance to enjoy Florida attractions, with a visit planned for nearby Walt Disney World.

Holli Leep, the coach’s daughter, a senior at the school, serves as team captain and has been cheering for several years.

“I’m really excited,” she said. “We’re really close as a team. It’s the first time since 1997 and we want to make our school proud.”

Ryleigh Adkins, a junior, also echoed the closeness and camaraderie they have.

“We’ve been really working hard together, as a team,” she said. “And it’s a big deal for us, since our school hasn’t been in such a long time.”

Coach Leep said that anyone who would like to contribute to the team’s efforts can send donations to the high school, in care of the team.

The winter season is upon us and help with heating is available, as the Ironton and Lawrence County Area CAO... read more