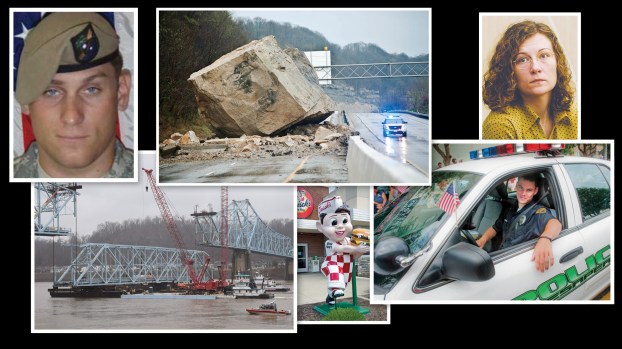 The decade that was: A look at memorable headlines of the 2010s

SOLDIER DIES FOR COUNTRY: On July 18, 2010, Sgt. Justin Bradley Allen, 23, a member of the U.S. Army’s elite Rangers, was killed as he served in Afghanistan. It was the fourth deployment to that area and second to Afghanistan for Allen. He died in a firefight while on combat operation in Kandahar Province. He was heading up an assault on an enemy position when he was killed. The Coal Grove soldier was awarded the Bronze Star posthumously.

GARVIN SENTENCED TO LIFE: In 2010, Kara Garvin avoided the death penalty after she was found guilty of the murder of three Franklin Furnace residents.

Garvin was convicted of the shooting deaths of Ed Mollett, his wife, Juanita Mollett, and their daughter, Christina Mollett, in their trailer on Snook Road in Franklin Furnace on Dec. 22, 2008.

MEGAN GOFF GETS SECOND TRIAL: A woman who was arrested in 2006 for shooting her estranged husband got a second trial. In 2006, Megan Goff contended she acted in self-defense as a result of battered woman’s syndrome when she shot Bill Goff 14 times with two different guns at his Hamilton Township home.

At her first trial, she was convicted and sentenced to 33 years.

In 2011, she was granted a new trial after the Ohio Supreme Court overturned her conviction after ruling the testimony of an expert witness should not have been allowed in the first trial. In August 2011, a Lawrence County Common Pleas Jury convicted her of a lesser charge of murder, as opposed to aggravated murder or, a third option, voluntary manslaughter. Goff was sentenced to life in prison with the possibility of parole in 18 years. In 2018, Goff went before the Ohio Parole Board to end her sentence and let her out of prison. The board voted unanimously against it. She is currently being held in Ohio Reformatory for Women in Marysville and is not eligible for parole until 2025.

RAY “MOOSE DUTEY RETIRES: In 2011, Ray “Moose” Dutey retired at the age of 81 after 24 years as the Lawrence County auditor. He got a start in politics in 1957 when he was elected to be a Coal Grove village councilman, later ran for a Republican central committeeman, became mayor of Coal Grove, and then county recorder before taking on the auditor’s office. He is still active in the Lawrence County Republican Party.

NEW BRIDGE BEGINS CONSTRUCTION: May 2012 saw the beginning of a new bridge connecting Ironton and Russell to replace the aging Ironton-Russell Bridge. Ohio Gov. John Kasich and Kentucky Gov. Steve Beshear led a delegation of county and state officials from both sides of the river for the groundbreaking at Depot Square in downtown Ironton.

BRIDGE DAMAGED: In May, a vehicle hit one of the vertical I-beams of the Ben Williamson Bridge, leading from Lawrence County to Ashland, Kentucky. At first, the bridge was open, with a restricted weight limit, but then it was shut down completely, until repairs could be made, which took until August.

GATEWAY CENTER: In November, groundbreaking took place on the 9th Street Gateway Center project. In the following years, the economic development project, located near the interchange of U.S. 52 would see the openings of Holiday Inn Express and Suites and Frisch’s Big Boy in 2015, and the Armory Smokehouse in 2019. A Marriott Town Suites at the site is currently under construction.

JAIL CRISIS: After the Lawrence County Jail failed numerous state inspections, an offer was made by the state of Ohio to move it to the now closed Ohio River Valley Juvenile Correctional Facility. The Lawrence County Commission originally agreed to make the move, but, due to funding and other issues, it did not come to pass. The jail situation has not been resolved to date and remains a major issue in each year’s election.

ARMING TEACHERS: Rock Hill Schools Superintendent Wes Hairston announced that a number of his teachers had completed specialized tactical defense training and were certified for in-school armed response in the event of an active shooter. Teachers who received the training were not identified and would have loaded guns. They would have access to the ammunition.

KEITH ELECTED: Ironton elected its first female mayor in 2015, with Katrina Keith taking 71 percent of the vote in a runoff election on Nov. 17, defeating City Councilman Bob Cleary. John Willis and James Tordiff were also candidates in the first round of voting.

OFFICERS FOUND NOT GUILTY: Three ex-Lawrence County corrections officers were found not guilty in October of abusing a prisoner in a trial in U.S. District Court, Southern District of Ohio in Cincinnati. Jeremy Hanshaw, Ronald Hatfield and Jason Mays were indicted after an Aug. 19, 2014, incident where the trio had been charged with allegedly mistreating Larry Kinstler, who had been arrested for disorderly conduct during the Rally on the River.

ROCKSLIDE: A rockslide dropped a boulder the size of a house in the westbound lanes of U.S. 52 near the bridge to Ashland on April 10. The road remained closed for two days while crews worked to clean up the scene.

NEW BRIDGE OPENS: After four years of construction and more than a decade of planning, the new Oakley C. Collins Memorial Bridge, connecting Ironton and Russell, opened to traffic on Nov. 23 with a dedication ceremony. The $81.3 million, 32-foot wide suspension span replaced the 94-year-old bridge, which closed to traffic on the same day.

BICENTENNIAL: Lawrence County celebrated its bicentennial on Dec. 20. Festivities took part throughout the year, including a special performance from the Oak Ridge Boys at the Lawrence County Fair in July.

TRAGIC CRASH: Chesapeake police officer Aaron Christian was hospitalized following a crash in his cruiser in September. He clung to life in the hospital for several weeks, before dying from his injuries on Oct. 18 at age 22, prompting an outpouring of grief across the county.

QUADRUPLE HOMICIDE: On Oct. 12, the county awoke to hear of a grisly scene in Decatur Township, when Donald McGuire, 50, his wife, Tammie L. McGuire, 43, her daughter, Stacey M. Jackson Holston, 24; and Holston’s son, Devin Holston, 8, were found dead of gunshot wounds in their home. A two-day manhunt ensued, with sheriff’s deputies arresting Arron Lawson. Lawson’s trial for the crimes took place in 2019, with a three-judge panel finding him guilty and sentencing him to death for the slayings.

OLD BRIDGE COMES DOWN: It had stood since 1922 and, in the spring, demolition commenced on the old Ironton-Russell bridge, which had closed the preceding November. First, the main span was lowered to a barge. Then, on May 5, crews from Brayman Construction Company and Advantage Blasting brought down the bridge’s anchor arms, the last remaining steel sections.

PARADE’S 150TH: The Ironton Lawrence County Memorial Day Parade marked a century and a half of honoring veterans and those who paid the ultimate price in their service. Nearly 30,000 people attended the 12-division event, which featured Brent Pyles as grand marshal, Rich Donohue as parade commander and Roy Ratliff as honorary grand marshal.

OPIOID EPIDEMIC: Like the rest of Ohio and Appalachia, Lawrence County continued to battle the addiction crisis. Strides were made in fighting it, with many officials adopting a focus on treatment, rather than simply sentencing offenders to jail. Several recovery facilities opened in the county in the last half of the decade, while judges Andrew Ballard and Kevin Waldo would establish certified drug courts in coming years. The Ironton Tribune hosted a forum on the crisis in 2018, with the surrounding week’s coverage earning the paper a first place award in reporting from the Associated Press.

FIGHTING TIGERS: In December, the Ironton Fighting Tigers faced off against the Kirtland Hornets on Dec. 7 in the Ohio High School Athletic Association District 5 championship football game in Canton. It was Ironton’s first championship game since 1999. Ultimately, Kirtland won, defeating the Tigers, 17-7.

NEW MAYORS: In November, Ironton elected its youngest ever mayor, with Samuel Cramblit II winning a landslide victory over incumbent Katrina Keith. In Chesapeake, Kim Oldaker was elected the first female mayor of the village, defeating incumbent Tommy Templeton. While Gary Sherman was elected as the new mayor of Coal Grove in an open field.

COLUMBUS — Ohio Auditor of State Keith Faber released the 2018 audit of the Village of Coal Grove on Thursday... read more