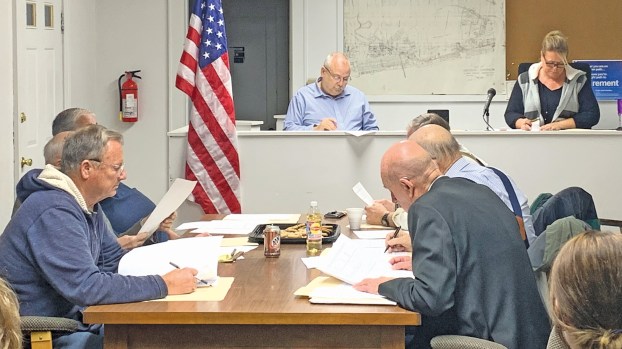 CHESAPEAKE — The Chesapeake village council voted on Monday to raise the hourly pay for police officers in the village.

Mayor Kim Oldaker, in her first meeting with the council in her new position, proposed giving current officers  a raise to $14.50, with new hires getting $13.50.

Randy Thompson, who serves as the village’s police chief, said the raise was key to retaining officers and building a strong police force.

“Other than this is the best village in the county, who would want to come here?’ he asked, pointing out that other villages in the county have higher pay and offer paid holidays and vacation.

“We can not survive without a good police department,” he said.

“They put their life on the line and I agree we should be able to do this,” he said.

Thompson said there was enough in the village’s police fund to cover the raise and that it would not affect the general fund.

He said the current pay would amount to $28,000 a year, if figured for 40 hours (The village keeps officers at 39 hours for part-time purposes).

“They go out and are a reaching into the pockets of people with needles and fentanyl,” he said. “Consider what these guys do for a living and they’re working for little more than they would be delivering pizzas.”

Thompson also said that the raise would be for the officers and that he did not stand to benefit, estimating that, at his schedule, he would only make $7 a week from it.

Hart said they would look into further raises and that the finance committee for the village, which also consists of council members Kenny Wolfe and Danny Burd, would study the possibilities.

The council voted 5-1 for the raise, with Richard McMaster dissenting.

Chesapeake police officers last received a raise in April 2019, under Mayor Tommy Templeton, when the council approved an increase to $12.50 an hour. Templeton made the proposal, as the village had the lowest pay in the county at the time.

The council also voted to accept the resignation of as the village’s fiscal officer.

Christine Nichols took the position in 2018, when it was changed to an appointed position following the resignation of longtime secretary–treasurer Peggy Houston.

“It is with deep sadness that we’re losing her today,” Oldaker said.

Her replacement will be appointed by the mayor and must be confirmed by council.

• Approved the holiday schedule for the village for 2020, with no changes from the previous year.

• Approved Oldaker sending a letter to area businesses to solicit donations for a village Easter egg hunt. Oldaker said it is the first of what she hopes will be many events for children and adults throughout the year.

• Heard from Hart, who proposed the idea of declaring the village a “sanctuary village for the Second Amendment.” No action was taken on the matter and it was tabled. Hart asked for the opinions of visiting political candidates Cole Webb, Brian Pinkerman and Jeff Halley on the issue. They said they did not know enough about the proposal to comment, but all stated they supported the Second Amendment and gun ownership.

• Heard from residents of North Huntington Heights, who voiced complaints about road conditions, litter and illegal camping along the road. Oldaker said she would meet with the county engineer’s office to determine what parts of the road were in village limits and would work on the problem.

• Approved a fingerprint-based time clock system for police and hourly village employees. Oldaker said the system she found was the “most reliable and affordable” available. She said other neighboring villages, including Proctorville, use this system.

• Voted to deputize council members for police work. Council members would be able to perform duties like directing traffic and observing, but would not carry arms. The vote was approved 5-1, with Kenny Wolfe opposing.

• Discussed the possibility of switching to an e-ticketing system for police, in which tickets would be printed from cruisers after filled out on tablets. The matter was tabled and Oldaker said she ordered new books of tickets in the meantime.

• Oldaker said hart has been named as mayor pro tempore for the village.

COLUMBUS (AP) — Ohio Gov. Mike DeWine asked the state’s Medicaid official to look into what can be done in... read more