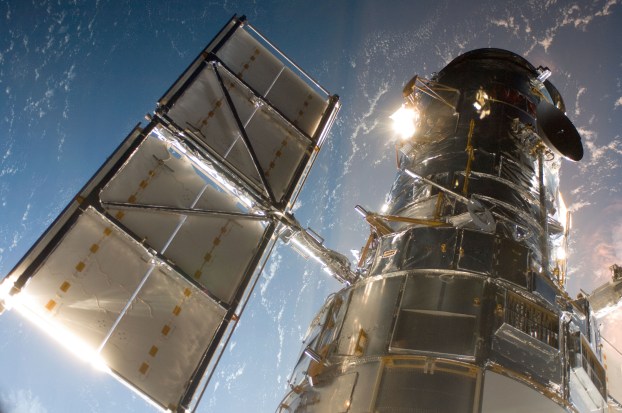 The Hubble Space Telescope in a picture snapped by a Servicing Mission 4 crewmember just after the Space Shuttle Atlantis captured Hubble with its robotic arm on May 13, 2009, beginning the mission to upgrade and repair the telescope. The Hubble Space Telescope is a project of international cooperation between NASA and the European Space Agency. NASA's Goddard Space Flight Center manages the telescope. The Space Telescope Science Institute conducts Hubble science operations. Goddard is responsible for HST project management, including mission and science operations, servicing missions, and all associated development activities.

The Hubble space-based telescope will turn 30 years old in April.

It was set in orbit by space shuttle Discovery on April 25, 1990. It has made some amazing discoveries about our almost infinite universe.

It has found that there are more than two million galaxies, some of which are billions of light years away.

Don’t even think about how many miles that is away from us. It makes me realize that our world is such a small bit of matter compared to the universe. With added knowledge from the Hubble, they now estimate that the universe is 13.7 billion years old.

It was set into orbit about 540 miles above the earth. The orbit decays over time and it must be given a boost periodically. It has much larger mirror than I imagined — 7.9 feet in diameter with a surface of 48.7 square feet.

It was a very expensive undertaking. Congress initially approved $36 million to get it started in 1978. By September 1978, the cost had ballooned to $1.175 billion. Now the cost is estimated to be more than $10 billion. As Sen. Everett Dirksen once said, “That runs into real money.” (That isn’t a correct quote, but paraphrased.)

The Hubble has had a lot of problems, some of them from the very first.

Kodak was commissioned to manufacture a backup mirror, but, because of budget problems, it was never used when it was completed. When the Perkin-Elmer mirror was installed and the telescope was lifted into orbit, it returned pictures that were no better than the earth-based instruments. Upon investigation, the mirror problem was discovered. It was considered an impossibility to replace the mirror in space or too expensive to return it to earth for replacement. The solution was to grind other mirrors to be placed in the light path to correct the aberration. In a sense, it was to install corrective glasses or spectacles.

The mission to install the corrective mirrors was accomplished finally on Jan. 13, 1993. It was a complex fix. Astronauts had to be trained to do the extensive repair job with over 100 specialized tools and had to remove the high-speed photometer to make room for the new optics, which required long extra-vehicular space work. Other repair items were taken care of too — the four gyroscopes for positioning the telescope were replaced as were the onboard computers and the solar arrays for powering the electrical and temperature control equipment. In addition to the repair, the telescope was give a boost to keep in the correct altitude.

There was a total of five repair missions, since the gyroscopes had to be replaced again.

The latest repair mission replaced the data handling unit and some other additional instruments which was completed in May 2009 by the Shuttle Atlantis. The telescope is expected to be decommissioned between 2030 and 2040.

But without the shuttle project, I wonder how it will be serviced and boosted in the future.

I have a new roommate. She purrs. Actually, she has been here for almost two weeks and it is the first... read more