Schreck will take her shot at Urbana 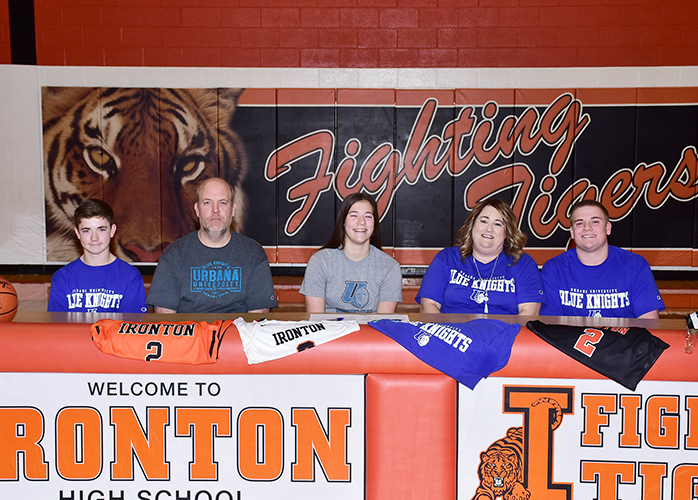 Riley Schreck is known for hitting 3s. Right now, she’s happy with just netting one.
That one is her future teams as the Ironton Lady Fighting Tigers’ senior basketball standout signed a letter-of-intent to play for the NCAA Division II Urbana Blue Knights.
The 5-foot-9 Schreck was a Division 3 third team Southeast Ohio All-District selection last year and first team All-Ohio Valley Conference.
Schreck averaged 10 points a game last season and is an outstanding 3-point shooter, hitting better than 35 percent of her long-rang attempts.
Because of her shooting ability and team play, Schreck said Urbana sees her as a two or three but “they said I can probably play anywhere but the five.
“I got recruited because I’m a shooter, but they liked how big I am and that I played different positions. And they liked me off the floor academically.”
Schreck has a 4.6 grade point average as does her twin brother Nolan who plays football and baseball.
“Two times we’ve had the exact same report card. I make everything into a competition and he hates it, but I have to beat him,” she said with a laugh.
Schreck talked with Mount St. Joseph, Glenville State, Defiance and several other D2 and D3 schools before settling on Urbana in large part because of head coach Andrea McCloskey is in her third season at Urbana after six years as head coach at Georgetown College. She played collegiate basketball at Rio Grande.
Urbana was 4-22 last season but is currently 8-5.
“I love the coach. I just like what they’re about. They’re pretty dag gum good. Everything they’re about is my top choice. I knew as soon as I got there,” said Schreck.
On the down side, a strained knee injury has limited her playing time this season.
“It’s been really tough mentally. I’ve never really been hurt before. It’s set me back. I’m not explosive right now. I’m trying to get through it, but as long as we’re winning, I’m fine,” said Schreck.
Ironton head coach Doug Graham said the injury has made a difference in her performance.
“It slowed her down a bit in preseason. She did therapy for about four weeks and missed a couple of games and she aggravated it in practice a couple of weeks ago. She’s coming along well and hopefully she’ll be 100 percent in the next couple of weeks or games and we’ll get back to seeing what we’re used to seeing from her,” said Graham.
Schreck plays volleyball and softball. Although basketball is her favorite, she admitted that “I really like softball, too.”
“I’ve never been selfish with the ball. I just want to win. That’s why I play all these other sports. I don’t just specialize in basketball. The main deal is to win and you have to be a team player to win,” said Schreck.
Several teams have left it open for Schreck to play more than one sport and she made visits to Midway and Glenville State for softball.
Being in an athletic-oriented family, Schreck said her uncle Bart Burcham has been the biggest influence.
“He’s one of the best basketball coaches I’ve ever played under. He’s always there for me. He’s been super influential this year getting me through this knee injury. He’s the G.O.A.T.,” said Schreck.
Graham said Schreck is the type of player every coach would love to have in their program on a regular basis.
“She’s a foundation type of kid. She’s at everything. Games, obviously, summer workouts, preseason workouts, she doesn’t miss anything. She’s just going to get better and better,” said Graham.
“She’s an Ironton kid. She plays everything. When she gets to the next level and has the ability to focus on her passion, the sky’s the limit for her. She’s really going to excel.”
And Graham said Schreck brings intangibles to the table including her excellence as a student.
“Everyone knows she can shoot the ball, but she’s very, very particular and strives for perfection which is a strength and also it can be a negative. She works really hard. I have her in the classroom and she’s a joy to have. She has a great personality. I feel a lot of kids enjoy her being around,” said Graham.
Schreck plans to become a high school math teacher and coach.