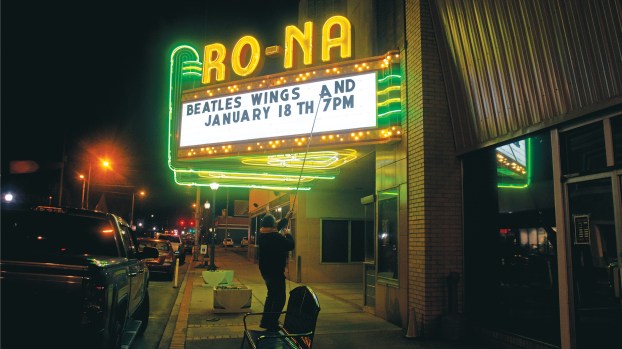 Rick Jansen, of the Friends of Ironton, changes the sign on the Ro-Na Theater in Ironton to promote The McCartney Project, which performs the songs of Paul McCartney from his work with the Beatles, Wings and his solo works. The band will perform at 7:30 p.m. on Saturday. (The Ironton Tribune | Mark Shaffer)

On Saturday, the Ro-Na Theater in Ironton will be filled with the music of rock and roll legend Paul McCartney.

The McCartney Project features all eras of music written by Paul McCartney including his works with the Beatles, Wings and his solo material.

Tony Burlingame performs as McCartney, down to his left-handed guitar playing and his Liverpool accent.

“We mix it up,” he said, adding the band has been doing a version of McCartney’s current show for several years but decided to delve into the performer’s back catalog. “There’s seems to be a resurgence in 70s rock, so we went ahead and put together a Wings-set based, based on their 1975 world tour. But there is still plenty of Beatles mixed in.”

As far as why Burlingame chose to perform the works of McCartney over say, Billy Joel or Elton John or another classic rock artist, he said it has to do with the timelessness of his music.

“McCartney wrote everything from “Michelle” to “Helter Skelter,” so you have everything from heavy metal to country songs,” Burlingame said. “He even wrote two classical pieces. He has been in the biggest pop band that ever existed and on his own. I think I picked Paul because of the wide variety and he plays guitar, piano. Paul does it all.”

Burlingame said that when it comes to doing solo McCartney songs, his favorite is “Yesterday,” because it contains “everything.”

“It is a perfectly written song, it has great lyrics and it has memorable melody. It brings emotion out in everybody,” he said. “It is short and sweet. I don’t even know how he wrote it. It is like it dropped out of space and he dreamed the melody.”

Burlingame said he thinks part of the resurgence in 70s music is that we are starting to lose those artists and people are rediscovering their back catalogs.

“People that didn’t get to see Led Zeppelin, The Who or Wings really want to see what they missed,” he said. “And it is a departure from the really produced, synthetic music that we have today. When you get down to old fashioned guitars, drums and organs, it just sounds so much more organic and better. It’s a real band, not just a loop or a sample.”