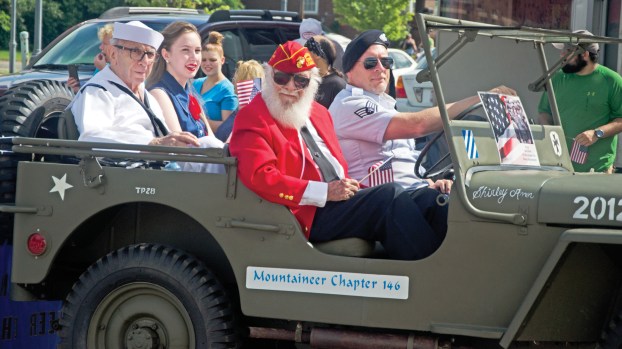 Members of the Mountaineer Chapter of the Korean War Veterans Association ride in the 2019 Ironton-Lawrence County Memorial Day Parade. Volunteers are needed with planning for this year’s event, set for Monday, May 25. (The Ironton Tribune | Heath Harrison)

The event will take place on Monday, May 25, with Jim Rowe chosen as grand marshal and a theme of “Honor • Respect • Thanks,” Lou Pyles, an organizer of the parade, said.

Rowe, part of the Southern Ohio Amateur Radio Association, is a lifelong Ironton resident, has been involved with the parade since 1992 and chose this year’s theme.

Pyles, who said she is honored to serve as this year’s division commander, said the event will be in need of volunteers and they are hoping the public will take part in the parade committee’s planning meetings.

“Anyone is welcome to come,” she said, stating the committee will meet on the second Monday of February and March at 7 p.m. at the VFW’s Ironton post, located at 3026 S. Third St.

In April and May, those meetings will take place at 7 p.m. each Monday at the same location.

Pyles said the biggest need is for volunteers to help with the line-up of parade participants in each division.

She said they like for the commanders of each division to be able to walk the parade route and that the extra help makes this possible.

She said a lot of the members of the parade committee are getting older and that younger volunteers would be a boost.

As for those who would like to march in the parade or enter a float, Pyles said she will be working on letters of entry this weekend, to be sent out to the regular participants, while they will also send copies to new entrants to local media in coming weeks.

“We like to keep things military themed and respectful of our veterans,” she said.

Pyles said anyone with questions can drop by the committee meetings.