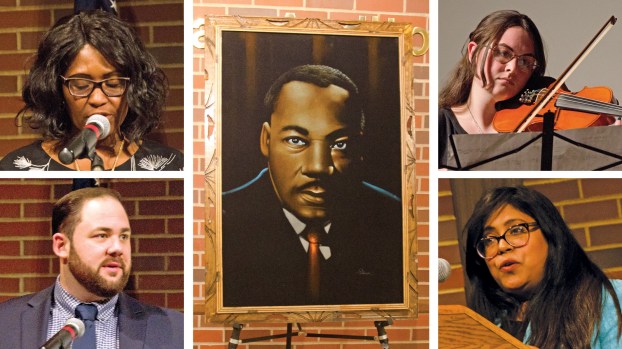 It was the 28th year for the event, which featured several speakers, as well as two performances from the Ironton High School Varsity Singers.

“Let us remember to work with all members of our community,” Dr. Salome Nnoromele, OUS associate dean said in introducing the event. “We are one community and one big village. Let us celebrate each other.”

Newly-elected Ironton Mayor Samuel Cramblit II made his first appearance as a speaker at the event, representing the city.

He described King as a “monumental figure” in the civil rights movement.

“No one is born racist,” Cramblit said. “No one is born to hate. People in general are afraid of what they don’t understand. I was fortunate not to be taught to hate growing up. You can learn from anyone with an open mind.”

He said people should “embrace members of various cultures and backgrounds” in the city.

Juli Stephens, field representative for U.S. Rep. Bill Johnson, R-Ohio, read a statement from the congressman, then spoke a bit on her own experiences.

She said she sees King’s legacy in her travels around the district.

“I see people, every day, quietly and without fanfare, helping each other,” she said. “They don’t see color or social status and they seek nothing in return.”

The night’s theme focused on women in the civil rights movement, with a special honor for Dr. King’s widow, Coretta Scott King.

“So many people are doing what Coretta Scott King wanted,” Stephens said. They go out of their way to help others.”

She urged people to always focus on where they agree with those of differing backgrounds or ideologies.

“It is my hope that you find that common ground,” she said.

South Point School board member Natalie Adams said she “was standing on the shoulders of a legacy.”

As a social worker and through her work with the CAO, she said she was inspired to run for the board.

“Things won’t change unless people are active,” she said. “I wanted to affect change, so I got involved.”

Teresa McKenzie, coordinator of accessibility services and veterans services led the crowd in reciting King’s words, while Dr. Hayley Mitchell-Haugen, of the school’s English department, and Nnoromele announced the winners of the student essay contest.

In the middle school category, all winners came from Ironton, with Kaeli Huff in first place, Victoria Hill in second and Zachary Gibson third.

In the high school category, all winners were from South Point, with Brayden Adkins first, Travis Stephens second and Bryson Hayes third.

For more photos from the event, see the Focus page on 8A.

ROME — The Ironton-Lawrence County Community Action Organization is working with developers on a proposal to create new housing in... read more