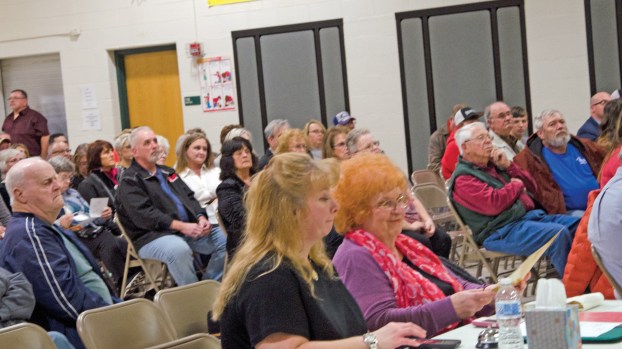 Fairland West is site of first candidate forum of season

ROME TOWNSHIP — The 2020 primary election is a little over a month away and the eastern end of the county was the site of the first major campaign event of the season.

In the competitive races, the first to speak were those running for the 93rd district House of Delegates seat, which covers Lawrence, Gallia, Jackson and Vinton counties.

The seat was previously held by Ryan Smith, who was term limited from running again this year. He resigned a year early, in order to take a position as president of the University of Rio Grande. Jason Stephens, who was serving as Lawrence County Auditor, was appointed to the seat by state Republicans in October and is running for his first election to the office for a full term.

First to speak was his Republican challenger, Jeff Halley, a member of the Gallia County school board, who had announced his run before Smith resigned.

Halley said he has been in politics several decades, having followed the path of his father and that one of his key issues is school funding.

“I want to be a voice for southeast Ohio in Columbus,” he said.

Halley said that he would serve the region “to the best of my ability, 110 percent.”

“I promise, if you send me to Columbus, you will not be disappointed,” Halley said.

Stephens said, since taking the seat in October, he has “been working hard to make you proud and represent you in Columbus.”

He cited his three terms as Lawrence County commissioner and three terms as auditor and said he had experience in budget management and bringing economic improvement.

He said he had improved the auditor’s office, making it more efficient and customer friendly.

No Democrats are running for the seat.

Two Lawrence County commissioners are on the ballot this year, DeAnna Holliday, who is seeking a second term, the first since switching from the Democratic to the Republican Party, and Republican Colton Copley, who was appointed in 2018 to serve the remaining years of the late Bill Pratt’s term.

Holliday will face Republican Shawn Hacker, who was not present Thursday, in the primary, and Democrat Jeff Blakeman in the fall.

Blakeman described himself as “a union man” who has worked in the structural and mechanical fields.

“I have a broad range of things in my head that I know about,” he said, stating that he would like to focus on infrastructure.

“Our roads are getting horrible,” he said.

He stated that he was opposed to abortion, having been adopted by his parents.

“I’m just glad someone gave the chance to be here tonight,” he said.

Holliday said she considered her bid for re-election to be “my job performance review.”

“I love my job and am committed to a brighter future for Lawrence County,” she said.

She pointed to the launch of Project First Impression, the opening of the Lawrence County Joint Response Operations Center, an increase in revenues and new business openings as gains the county has made in the last four years.

She said she planned to work on the jail issue in coming years.

“I had a plan, but it was voted down,” she said she hoped funding for jails in the state’s 2020 budget could address the issue.

Copley, who works as an emergency room physician, was not present for the forum, but his Republican challenger, businessman Brain Pinkerman, addressed the room.

He said he has owned and operated Pinkerman Excavating and Construction since 2005, but, if elected, he would step aside to focus on “being a full-time commissioner.”

Having worked seven years in local government, including the Rome Township board of trustees, he said he “knows what works in local and city government well.”

“I want to be an advocate for villages, townships and all citizens of Lawrence County,” Pinkerman said, adding that he hopes to concentrate on helping senior citizens, children and veterans.

No Democrat has file for the seat.

The Lawrence County Auditor’s race comes on the heels of another political shake-up.

After accepting the job as state representative, Jason Stephens resigned from the auditor’s office, with Paul David Knipp being selected by county Republicans to fill the position.

Stephens had been re-elected in 2018 and, due to the number of years left on his term, Knipp must run for election to finish the term, which is on the ballot again in 2022.

Vallery Dyer, who had made a pitch for the appointment last year, is challenging Knipp in the Republican primary.

The wife of Proctorville veterinarian Mike Dyer and working in the real estate field, she said county has supported the family for 26 years.

“I truly want to find a way to give back to the county,” she said. “You have been truly good to our family.”

She said her work taking care of the financial obligations of businesses gave her “the duties and skill set best aligned” for the job.

“I believe financial accountability, honor, integrity and transparency are not just campaign slogans to run on, but a way of life,” she said.

Also running on the Republican side is former County Commissioner Les Boggs.

Having lost a bid for re-election in 2016, Boggs said he was “enjoying this comeback campaign.”

He opened by telling the room he had five college degrees.

“But that means nothing,” he said. “You can be an educated idiot. There are two kinds of sense — common sense and horse sense.”

Boggs said, as commissioner, he had “led the drive to organize our now award-winning EMS,” had started a program to help people pay for prescription drugs and worked to reduce rates for the Union-Rome sewer system.

He said he wants to focus on helping people deal with rising property tax rates and to improve the financial condition of the county.

Knipp, came to the auditor’s office from a position on the Rock Hill school board.

He said he a proud father of four and has been “serving honorably in the position” since October.

“I ask for your vote to continue,” he said. “I believe my education and experience qualify me to continue to serve.”

Knipp has also been a teacher in Rock Hill schools and served as an administrator, a well as a member of the board of trustees for the Briggs Lawrence County Public Library.

He is licensed to practice law in Ohio, Kentucky and West Virginia and served as the assistant prosecuting attorney for Jackson County.

On the Democratic side of the ballot, businessman Jason Tolliver is making another bid for the office.

Having unsuccessfully challenged Stephens in 2018, he said he is focused on the same issues.

Tolliver said he would like to work with local officials to take on the issue of rising property taxes.

He also praised the recent decision by the Lawrence County Commission to declare the county “a Second Amendment Sanctuary” and said he is “pro life and pro-Second Amendment.”

In the Lawrence County Sheriff’s race, incumbent Republican Jeff Lawless is seeking a third term in office. He is being challenged in the general election by Democrat Joe Ross.

Ross, the lead detective for the Ironton Police Department, said he wants to be sheriff “in order to make change.”

A veteran of the National Guard and a former Coal Grove council member, he said he wants to bring accountability and transparency to the office.

“I want to show the citizens of Lawrence County results and not excuses,” he said.

Ross said he wants to focus on the jail issue and “to be a full-time sheriff for the whole county,” and wants to bring more patrols to the eastern end of the county.

“I’m standing here for you, and not Joe Ross,” he said.

Lawless said he has served in law enforcement since 1986 and “worked my way up the ranks.”

He said he has kept his office within its budget and has led in fighting the drug issue.

He said he is committed to getting a new jail, but must consider “cost and cost of operations” in reaching a solution.

Lawless said he has also focused on school safety and has led the Shop-with-a-Cop program, which he said helped 60 children in need this year.

He also pointed to the capture of Arron Lawson in 2017, after the largest manhunt in the county’s history.

“A quadruple murderer was taken off the streets,” Lawless said of the slaying in Decatur Township.

Baker, the treasurer for South Point schools, said she has experience “understanding challenges with limited resources.”

“I struggle every day with unlimited needs, but limited resources,
she said.

She described herself as “a country girl,” who grew up on Aaron’s Creek and now lives in Willow Wood.

Baker said she has a master’s degree in business administration and is a licensed certified public accountant.

Burcham said his office has successfully collected more taxes each year since he has been in office and cracked down on delinquencies.

“We simply ask that everybody pays their fair share,” Burcham said, stating the funds provide for the county’s schools.

He said one of the highlights of his record in office is the neighborhood investment program, in which buys bonds and he gives townships and others lower rates than they would get from a bank. He said the building they were in had benefitted from the program, with it helping in classroom construction and making the school energy investment.

“I believe in investing in the people of Lawrence County,” he said.

Burcham, who is a CPA, also citied his work as president of the county’s land bank, which has torn down more than 200 blighted and abandoned structures in the few years since its inception.

Webb, who is currently a Union Township trustee, got easily the biggest laugh of the night with a self-deprecating joke about his size.

He said he believes “everybody should pull their own weight — and, as you can tell, I have no problem with that.”

Webb said the treasurer’s office was “a key position of public trust in the affairs of Lawrence County.
He said, if elected treasurer he would “implement a code of ethics, personal and professional,” for the position and staff and “hold myself to the highest standards.”

“I have the ability and skills to do the job,” Webb said. “You can trust me to be faithful in all aspects of the position.”

The school’s gymnasium was packed for the event, with many standing as the crowd overflowed the allotted seats.

The Fairland High School cheerleaders were set up at the event, taking advantage of the occasion to fundraise for their trip Orlando, Florida next week, where they will take part in the 2020 UCA National High School Cheerleading Championship on Feb. 7.

Organizers of the forum said they were pleased at the turnout, noting that they had surpassed the 100 seats set out for the crowd. It was their first attempt at organizing such an event. They said they will decide later if they will do a repeat forum for the general election campaign.

The next major event in the campaign cycle is the Concerned Citizens of Burlington’s Meet the Candidates forum, which will take place at Burlington Elementary on Thursday, Feb. 20. The group will host a general election forum in the fall.

The Ironton Tribune is also planning a candidate forum for the fall races.

SOUTH POINT — A South Point teen has won an award for her first novel. Hannah Boggs, 18, a senior... read more