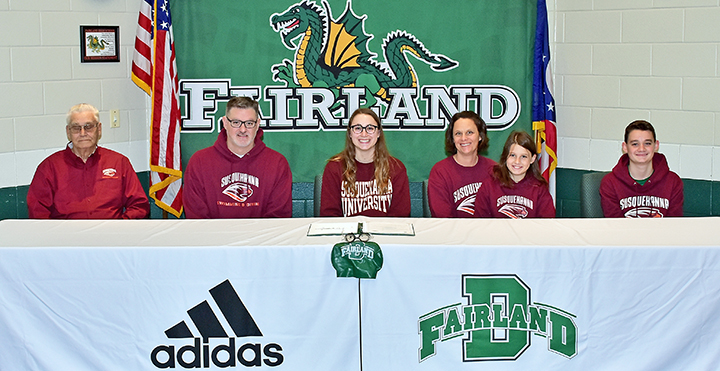 PROCTORVILLE — About 71 percent of the earth is water and about 60 percent of the human body is water.
That makes sense when talking about Erin Rowe.
The Fairland Lady Dragons senior not only loves swimming in high school but now she will continue to live part-time in the water after signing a letter-of-intent with the Sasquehanna University River Hawks.
“I played volleyball in middle school and then I played softball my freshman and sophomore years of high school, but then I stopped because I needed to focus on my swimming. It was just taking too much time. I had to practice more,” said Rowe.
“I started swimming when I was six or seven years old and I’ve been swimming ever since. I’ve played a lot of other sports since I was little, but swimming was always the one I came back to.”
Swimming is a large part of Rowe’s current schedule which explains why she has been forced to abandon playing other sports.
“I practice four times a week and I usually try to throw in a lift. On Mondays, I’m in self-defense martial arts class. The martial arts is a lot of abs (abdominal) so that’s kind of my abs workout because abs is kind of a crucial point for swimming. Everything else revolves around abs,” said Rowe.
Rowe did an extensive search and the finalists were Rippon College in Wisconsin, Youngstown State, Ashland University and Piedmont College.
The NCAA Division 3 school located in Selinsgrove, PA., is a member of the Landmark Conference that includes teams from New Jersey, Maryland, Washington, D.C., as well as four other schools in Pennsylvania.
“For me, the minute I walked on the campus I fell in love with it. Everyone was just so open and welcoming. I wanted to go a smaller school and I didn’t have the feel at Sasquehanna that I had anywhere else,” said Rowe.
“One of the things that was important to me was the study abroad program. They have a mandatory study abroad program and that was very important to me. I really clicked with the team much more than any other team I visited. It was just the perfect fit for me.”
One thing that Rowe hopes to benefit from is a regular coach.
“I just hope to improve. I’ve had a lot of coaches throughout my life and I’m hoping that having a consistent coach will help me become a better swimmer,” she said.
Rowe plans to major in Business Management focusing on entrepreneurship.