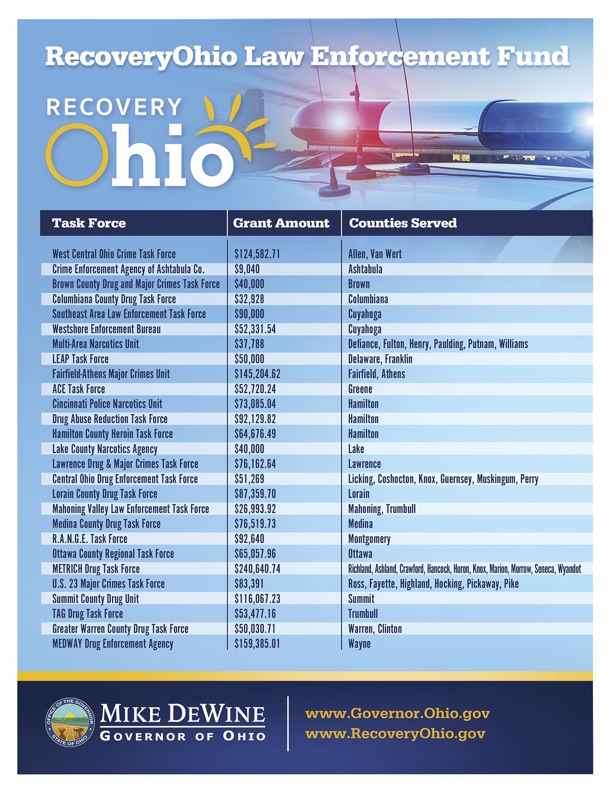 COLUMBUS — Ohio Gov. Mike DeWine announced today that he is awarding more than $2 million in grant funding to support local law enforcement in their work to disrupt the drug trade in Ohio and enhance their role in substance use awareness, prevention, and recovery.

Grants from Gov. DeWine’s RecoveryOhio Law Enforcement Fund will be provided to 27 existing drug task forces to intensify their efforts to identify high-level drug traffickers; dismantle large drug trafficking organizations; interrupt the flow of money and drugs from Mexican cartels; and prevent the sale of illegal narcotics to those suffering from substance use disorder.

Funding will also be used to support the mission of Gov. DeWine’s RecoveryOhio initiative which aims to increase substance use and mental health awareness, implement age-appropriate prevention education in schools, connect those who need help with treatment, and promote recovery.

A full list of award recipients can be found at www.governor.ohio.gov.

The program is being administered by the Ohio Office of Criminal Justice Services.

The Franklin-Madison Major Drug Interdiction Task Force, which previously operated only in Franklin County, received additional funding to work in partnership with authorities in Madison County.

The Lucas-Wood Major Drug Interdiction Task Force, which previously operated only in Lucas County, will receive additional funding to work in partnership with authorities in Wood County. New task forces are in development.