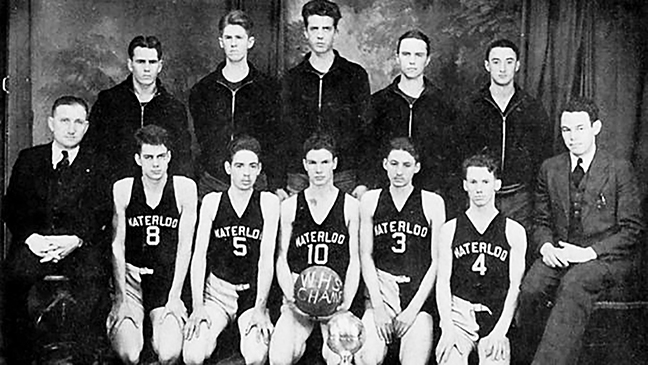 WILLOW WOOD — Back to the Future, Symmes Valley style.
Symmes Valley schools were created by the consolidation of Waterloo, Windsor, Arabia, Cadmus, Aid-Mason and Wilgus communities.
The four high schools were Cadmus, Aid-Mason, Windsor and Waterloo. But it was the exploits of the Waterloo boys’ basketball team that brought historic fame to the area.
Coached by Magellan Hairston, the Waterloo Wonders won back-to-back Class B state basketball championships in 1934 and 1935.
Now, 85 years later, those championship teams will be honored during a special two-day celebration on Thursday and Friday, Feb. 13-14.
One tribute to the old Wonders will be during Friday’s game against the Green Bobcats when the Vikings team will wear throwback uniforms similar to the ones worn by the Wonders.
The Vikings will wear uniforms that have only 7-inch inseam shorts instead of the modern day knee-length shorts. The nickname “WONDERS” will be across the front of the jerseys.
Waterloo did not have a gymnasium until 1926. The team played in the community halls of the nearby churches or other schools.
The team was comprised of cousins Orlyn and Wyman Roberts, Beryl Drummond, Curtis McMahon and Stuart Wiseman.

The Associated Press McKinnley Jackson, a huge and talented defensive tackle from Mississippi, was one of the few five-star recruits... read more