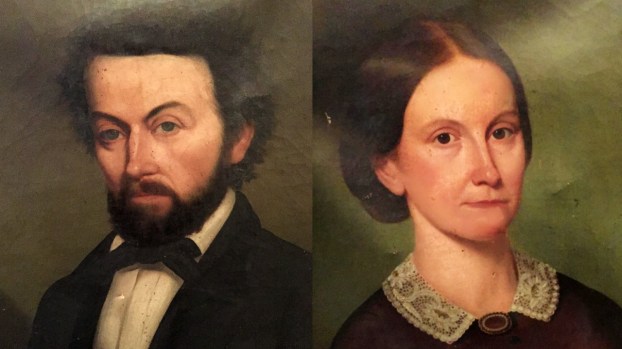 The Lawrence County Museum acquired hand painted portraits of legendary Ironton residents Ralph Leete and his wife, Harriet. The paintings were completed by a 19th century traveling artist and were once displayed in the Leete home on Park Avenue.

Ralph Leete moved to Lawrence County from Pennsylvania in 1844. He married Harriet Hand and the couple had five children. He began his career as a schoolteacher at Buckhorn Furnace.

While working there, he also studied law and was elected as the prosecuting attorney, first at the county seat of Burlington, then later in Ironton, and eventually served two terms in the Ohio Legislature. Possibly the most famous case of Mr. Leete’s career was the Polley Children kidnapping case of 1850 — the oldest, longest-running fugitive slave trial in U.S. history.

Brothers Peyton and Douglas, who were slaves in Kentucky, gained freedom through the last will and testament of owner David Polley upon his death in 1849. Douglas then bought the freedom of Peyton’s wife, Violet, and their eight children.

Upon their release, the Polley family came to the free state of Ohio and settled in Lawrence County as farm laborers. But on the night of June 6, 1850, a Kentucky slave trader hired four men to kidnap the Polley children. They were taken back to Kentucky, where four of them were sold to William “Squire” Ratcliffe in Wayne County, (now West Virginia).  Mr. Ratcliffe used his political influence to prevent this matter from coming to trial, and the case was left hanging on an unsigned court order in 1859.

Mr. Leete endeavored to have the family reunited, even appealing to the Ohio governor. After years of litigation across multiple jurisdictions, the family was mostly reunited, though young Nelson Polley died in 1855. Though they were back together, the children were still slaves by law, due to unresolved court cases and other legal technicalities. Mr. Polley ceased further attempts to obtain their freedom out of fear of losing his family again.

Amazingly, in 2012, with the help of local resident and Polley family descendant James Hale, a Wayne County, West Virginia judge ruled on the case that had, by that time, been pending for over 150 years.  The court ruled the kidnapping of the children was unlawful, and the family was retroactively declared free, in a doctrine known as “nunc pro tunc,” Latin meaning “now for then.”

Ralph Leete died in 1905 at the age of 82. Funeral services took place at his residence at 211 Park Ave. His obituary described him as “one of the most honored and respected pioneer citizens of this county.”

The paintings of Mr. and Mrs. Leete were donated by Dayton resident Johanna Hoak. Her father acquired the Leete residence and paintings from Fred Leete, who was one of the original founders of the Lawrence County Historical Society.

The paintings will be on display the Lawrence County Museum at 506 S. 6th St. in Ironton, when the museum opens for the season in April.

Nicole Cox is a trustee at the Lawrence County Museum & Historical Society and owner of LawrenceCountyOhio.com. She can be reached at nsratliff@gmail.com.

My office is a mess. It’s not actually my fault. I know what you are thinking! How could I tell? I know... read more