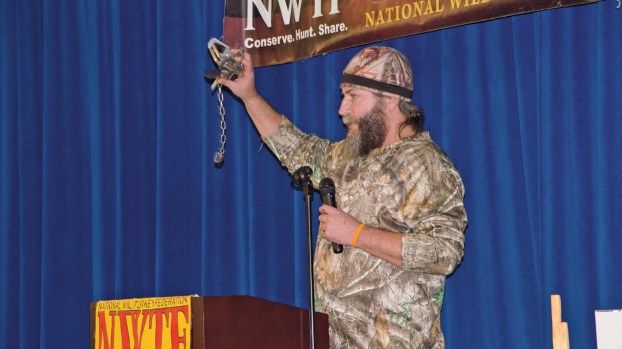 GETAWAY — For the past four years, the South Hills Longbeards chapter of the National Wild Turkey Federation have been hosting its annual Coyote Hunting and Trapping Seminar.

“We saw a need for it,” Larry Pernestti, president of the Longbeards, said of the coyote population. “And it’s a way for people to meet people who are already doing it, hunters and trappers, who are good at it and they can get advice.”

About 200 people came out to the event, despite the snow and the ongoing flu, at Collins Career Technical Center on Friday, where they were treated to a meal preceding the speakers.

Among those presenting was Shannon Sizemore, a coyote hunter, who said he has been at it for about 10 years.

He described how he moves about properties, hunting for coyotes, adding that he does not stay in an area more than 20 minutes or so at a time.

He played recordings of sounds used to attract the animals, beginning with a female whimper and followed by chirps.

Representing trappers was Jerry McIntyre, who had a booth set up featuring several coyote skins, along with other animal skins.

He gave demonstrations following the speakers and had traps and bait samples at his booth that he gave out to younger attendees.

Darin Abbott, Lawrence County officer of the Ohio Division of Wildlife, was there, along with two other officers.

He spoke of the proposal to move to a coyote hunting season and said the agency is looking for input from the public on the idea, which would coincide with fox season.

He also urged those taking part in hunts who use social media to use “common sense” on what they post online publicly, urging them to keep photos “tasteful.”

“Don’t hurt yourself and don’t hurt us as sportsmen,” Abbott said.

Travis Bowman, with the Longbeards, said the NWTF was founded in 1973 with the goal of restoring the turkey population to a huntable population.

And having met and surpassed that goal, he said they have now moved into areas such as habitat conservation.

Following the seminar, a coyote hunt was started, which ran through the weekend.

Sponsored by Todd’s Sporting Goods in Proctorville, Pernestti said the event was made up of 45 2-person teams who had registered for $45.

The entry fees went into a pot.

“Whoever killed the most coyotes got 50 percent of the pot,” he said. Second place took 30 percent and third took 20 percent.

Pernestti said it was important, as sportsmen, to thin the coyote population.

“For those who hunt turkey and deer, the coyote is one of the top predators,” he said.

Pernestti said they also raffled off five guns at Friday’s event and signed up 24 new members for the Longbeards.

Preventing illness from flu, viruses: With a risk of complications, prevention is key

COLUMBUS — The Ohio Department of Health reported last week that there have been more than 4,400 hospitalizations due to... read more