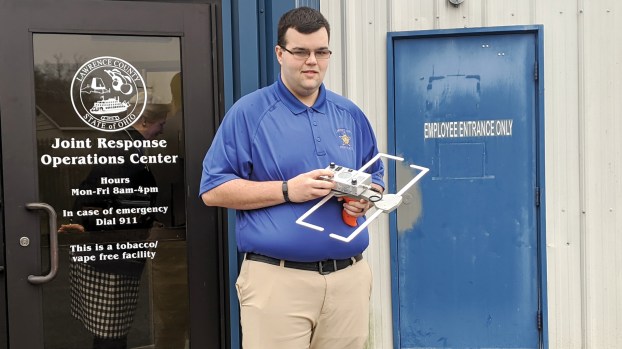 Dakota Bryant, a dispatcher for the Lawrence County Sheriff’s Office and one of the coordinators of Project Lifesaver, uses a tracking device as part of the demonstration on Tuesday of new equipment the sheriff’s office bought to help locate lost people. The equipment was purchased with a $4,783 grant from the Foundation for the Tri-State Community. (The Ironton Tribune | Sarah Simmons)

On Tuesday, the Lawrence County Sheriff’s Office got new equipment that will help track down “at risk” people if they get lost.

Called Project Lifesaver, people enrolled in the program wear a band with a transmitter encased in an oval case. Each transmitter has its own serial number, so if the person wearing it gets lost, an officer can track them down with a special locator receiver.

A $4,783 grant from the Foundation for the Tri-State Community gave the sheriff’s office the opportunity to purchase two new tracking devices, seven transmitters and two hard cases for the equipment.

The Lawrence County Sheriff’s Office has had the program since 2008 and much of the equipment and the bracelets have been purchased with donations from many local community groups over the years. There are 17 people currently enrolled in the program through the sheriff’s office.

The new equipment included several wrist bands and a new locator receiver. The goal is to find the lost person as soon as possible before they get injured.

“Should they wander away, we can track them with this equipment,” explained Sheriff Jeff Lawless. He said in the past 12 years, they have tracked down several people “and in fact, saved lives.”

He said in one case, an elderly man wandered away from his home on a cold, snowy day and with the Project Lifesaver, they were able to locate him within an hour.

Lawless said the new equipment will help them track people better than before.

“And with this grant, we were able to buy seven new bracelets,” he said. “This will help provide some security, some peace of mind for their loved ones.”

The bracelets cost around $350 each. Lawless said the sheriff’s office doesn’t have the funding to purchase them and relies on donations to get them.

Lawless said that he felt fortunate that Foundation for the Tri-State gave them a grant for “such a worthy project.”

“It is a tremendous benefit for our community,” he said.

Mary Whitten Wiseman, president of the Foundation for the Tri-State Community, said it was a great application for a good cause.

“We are so excited by this,” she said, as she looked over the new equipment.

The foundation serves Ohio, Kentucky and West Virginia and gives out grants for educational, cultural, charitable and scientific pursuits.

Project Lifesaver is a nationwide program, so if a person is traveling and gets lost, the local police can call the Lawrence County Sheriff’s Office, get the tracking number for the bracelet and then use their own equipment to find the lost person.