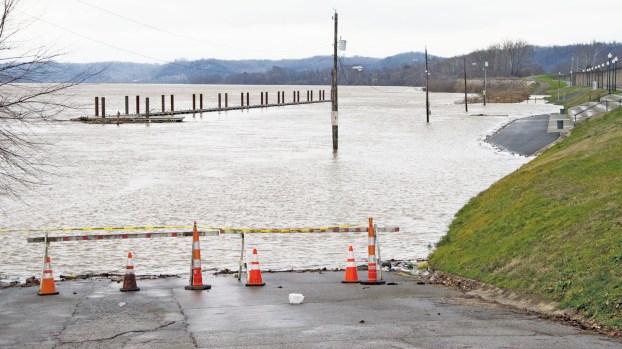 The riverfront park at Ironton was closed off with high water reaching over the stage area on Thursday. The Ohio River was at 48.9 feet. (The Tribune | Mark Shaffer)

Constant February rains, and a bit of snowfall, have led to the Ohio River rising over its banks and filling tributaries.

In response, the City of Ironton put up a floodgate on Thursday afternoon.

The city’s Flood Defense department was putting up the gate 10 on North Second Street and Hicks Alley, south of Storm’s Creek. The creek had risen to nearly 49 feet.

Mike Pemberton, the Flood Defense superintendent, said that their operating procedure from the Army Corps of Engineers requires them to put that gate up first.

“It’s the lowest floodgate seal in Ironton. That’s why it is the first to go in,” he said.

Since the Flood Department only has two employees, men from the water, street, waste water and sanitation departments were pulled off their regular duties to carry out a couple hundred timbers from the storage area in the floodwall to build the gate. While they were doing that, school buses were transporting students who had been let out of Ironton Middle and Elementary schools early because of the flooding.

“We’re stacking enough to put it about the height of your head, about five and half feet,” Pemberton said.

The Ohio River was at 48.9 feet and that made Storm’s Creek at the same level.

“If it gets to 52 feet, we will have to put up the other gate at Storm’s Creek,” Pemberton said. “That’s gate 17, it is always the second closure. I think it supposed to crest at 52 feet. If we get a good forecast in the next couple of days, we will know if we have to close it.”

There are 19 gates in the Ironton’s flood system, but the city has rarely used all of them at once. The closest the city has come to that was in 1997, when five gates were put up and the Ohio River crested at 57.9 feet. At 58 feet high, the Ohio River rises to within five feet of the Center Street gate.

To keep traffic flowing, the Ohio Department of Transportation opened up McPherson Street to U.S. 52.

Other spots around Lawrence County that were closed on Thursday by ODOT because of flooding included State Route 93 near State Route 373, and two locations on State Route 650 including one mile north of Hanging Rock and between Little Pine Creek Road and Kellys Mill Road.

Pemberton said the biggest issue the Flood Department has had is actually flooding within Ironton, rather than from the river. He was out until 4 a.m. Thursday morning dealing with the heavy rain and its side effects.

“It’s interior flooding. When you close all the underground sluice gates, then you have to pump the water up and over the floodwall,” he said. The city has 24 flood pumps to deal with it.

February has become a month of flooding in southern Ohio.

In February 2019, there was so much flooding in southern Ohio that Gov. Mike DeWine declared a state of emergency in 20 Ohio counties, including Lawrence County, that suffered from significant infrastructure damage as heavy rains poured down from Feb. 5-Feb. 13 on already-saturated soils, damaging public infrastructure like roads and culverts.

In 2018, then-Ohio Gov. John Kasich made a flood emergency declaration for 17 counties including Lawrence County.

The emergency declaration helps counties get aid from the state and federal governments.