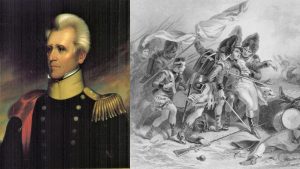 LEFT: A portrait of Gen. Andrew Jackson, who would later serve as president, by R.W. Earl, hangs in Jackson’s home, the Hermitage, in Nashville, Tennessee.
(Public domain)
RIGHT: This 1860 drawing portrays the death of Edward Pakenham at the Battle of New Orleans during the War of 1812. Pakenham led British forces during the battle.
(Public domain)

Final conflict of War of 1812 came days after peace treaty

After a lapse of 29 years, the United States went to war again against the British Empire in what is known as the War of 1812 or “Mr. Madison’s War.”

The United States was woefully unprepared! Our federal treasury had little money. Our national army had only about 6,700 soldiers and its officers would prove to be “Revolutionary War relics.” Our navy had less than 20 seagoing vessels.

New England, a Federalist hotbed, opposed the war due to its commercial investments. The British were also thought to be stirring up the Indians in the Old Northwest.

England and Napoleon’s France were, at the time, locked in a European death struggle. Neither nation respected the rights of neutrals like the United States. We wanted to trade with both.

Americans would cry “Free Trade and sailors’ rights.” The war was fought primarily because of impressment and the British would not stop its “man-stealing.”
British seamen deserted and the British navy became shorthanded. British boarding parties would line up sailors on American ships and have them pronounce the word “peas.” If the sailors pronounced that word as “paise,” they were thought to be Irishmen and thus, British subjects.

Impressment had been employed by England for over 400 years. They would not stop it.

Both Napoleon and the British denied the United States access to their enemies’ ports. Besides impressment, Indian attacks encouraged by the British upset Americans moving into the Old Northwest. There were 13 men in our Congress who were called “War Hawks.” They, led by Henry Clay and John C. Calhoun, wanted war and bragged we could invade and seize Canada easily. Southerners looked at Spanish West Florida and longed to invade and seize it, since Spain was an ally of Great Britain.

At the end of March 1814, Napoleon’s empire collapsed. After that, England could concentrate solely on fighting the United States.

The English devised a three-point plan to end the War of 1812. They would launch a two-pronged invasion of the United States, via Niagara and Lake Champlain to eliminate the Northeast from the war. They would also attack Baltimore, that nest of American privateers. Here, they would concentrate on Fort McHenry. Their third military point was to seize New Orleans to control the Mississippi River, lifeline of the American West.

Although the British captured and burned buildings in Washington D.C., they failed at Baltimore and at Plattsburgh on Lake Champlain.

England’s last stroke to end the war of 1812 centered upon New Orleans. If the British could capture New Orleans and the Mississippi Valley, perhaps they could detach the Southwest from the United States. The so-called Battle of New Orleans was actually several clashes fought over a period of two weeks.

However, the climax and decisive day was Jan. 8, 1815. A British flotilla of 50 ships appeared off the Louisiana coast. The British Army and Navy combined had almost 20,000 veterans. Some of their soldiers were black battalions from the West Indies. They were experiencing difficulty coping with icy January weather.

The British general who would lead them was Edward Pakenham, a brother-in-law of the Duke of Wellington who had defeated Napoleon at Waterloo.

Pakenham hoped his success at New Orleans would gain him more fame than his brother-in-law. His troops had fought Napoleon and were veteran soldiers.

The secretary of war sent orders to the legendary Indian fighter, Andrew Jackson, to leave Mobile, Alabama, and go take charge of the defense of New Orleans.

He would organize backwoodsmen from Tennessee (the “Dirty Shirts”), clerks, merchants and bookkeepers from the city itself, a battalion of freed slaves, a unit of Choctaw Indians, French veterans of Napoleon’s armies, Kentucky militia and the “Red Shirts” of the smuggler Jean Lafitte.

These men had not been trained and many did not have weapons. Jackson had about 6,000 men, but three-quarters of them were militia.

The British occupied the Villere plantation on the left bank of the Mississippi River, a few miles from the city. In a night attack on the British on Dec. 23-24, Jackson stopped their advance. On New Year’s Day of 1815 in an artillery duel, the British were restrained again. The American watchword became “Fight Owl.”

Pakenham decided to wait (one whole week) for reinforcements. The delay proved fatal, as Jackson strengthened his lines by piling med high on the ramparts.

Jackson placed his army behind the dry Rodriguez Canal. The canal was fronted with cotton bales five feet high and sugar barrels. Thirty feet behind the canal, Jackson’s men had built earthen ramparts. To get to Jackson’s men, the British would have to use scaling ladders.

Jackson’s line extended from the left bank of the Mississippi to a cypress swamp, 11/2 miles away. He had 16 pieces of mounted artillery. Jackson’s men had confidence in him because he had won the battles of Talladega and Horseshoe Bend previously.

However, Jackson was consumed with dysentery and was very weak. He could barely stand, but inspected his lines on foot. He could hardly eat anything, partaking only of boiled rice. To his men, he was “Old Hickory,” a very tough frontiersman.

The British had hoped to spend Christmas in New Orleans. That would not happen!

As more soldiers came to Jackson, he had a total of 6,504 men at his disposal. Pakenham had a total force of 14,450. Jackson was awakened at 1 a.m. on Sunday, Jan. 8, 1815. An American officer requested reinforcements on the other side of the river. Pakenham awoke at 5 a.m. and was told his timetable for the main attack was behind schedule. As the fog began to clear, Pakenham ordered the firing of two Congreve rockets as a signal to attack Jackson’s army behind Rodriguez Canal and mud-piled ramparts.

The 5,300 British advanced in parade — ground formations of 60 men abreast and four men deep. The soldiers carried ladders and bundles of sugar cane to get across the dry canal to the ramparts.

The Americans opened fire with artillery when the British were 500 yards from them. Pakenham then joined his men in the assault after the American artillery caused gaping holes in the British lines. He advanced 40 yards when his horse was shot and Pakenham injured his shoulder.

After securing another horse, Pakenham was shot through the neck and abdomen. Under an oak tree, Pakenham died after uttering, “Lost for the lack of courage.” In only 25 minutes, the British Army lost 2,044 men killed, wounded or missing.

More than 500 British rose up after the firing stopped. They had hidden underneath dead and dying British soldiers and now walked toward the American lines to surrender. Andrew Jackson’s victory was one of the most one-sided battles in history. American losses amounted to 13 dead, 39 wounded and 19 missing for a total of 71. This frontal assault over open ground with American infantry fortifying a dry canal was suicide.

Little did officials in London and Washington D.C., much less the armies at New Orleans, know that the war had ended with the signing of the Treaty of Ghent on Dec. 24, 1814 — 15 days before the Jan. 8 battle.

The American ship Astrea was coming home with the news that a treaty ending the war had been signed at Ghent, Belgium. The Battle of New Orleans has been called useless, senseless and needless, since the peace treaty of Dec. 24, 1814 ended the war.

There was no way to notify political leaders or armies that peace had come, because it took six weeks to cross the Atlantic from Western Europe. News of the Battle of New Orleans reached Washington on Feb. 4, 1815. On Feb. 13, 1815, the Treaty of Ghent reached Washington.

With such a lapse of time, Americans felt they had humiliated the British and won the War of 1812. This treaty would not become binding until ratified by both nations. The War of 1812 was a stalemate, no one won nor lost this war. This war settled none of the reasons the United States gave for fighting it.

Fame followed some of the war’s participants. Pakenham’s body was returned to the fleet where his wife awaited him. His body was pickled in a barrel of rum so he could receive honors when the army returned to England. William H. Harrison and Andrew Jackson became United States presidents. The Indians believed Tecumseh would “come again.”

Of all the famous participants in the War of 1812, Jean Laffite remains an enigma.

Laffite and his brother, Pierre, had their own little kingdom centered on Grant Terre Island in the Gulf of Mexico, 40 miles south of New Orleans. Letters of marque from foreign countries allowed Laffite and his men to attack merchant shipping with nations whom they were at war with at the time.

Many called this “Baratarian privateers” pirates. Laffite’s blacksmith shop in New Orleans served as a “front” for his smuggling business. People of all classes in New Orleans purchased his smuggled goods and legal authorities “turned their heads.”

The British had offered Laffite and his men 30,000 British pounds to assist them in their invasion — more than $2 million today. Laffite double crossed them and offered his services to General Jackson.

Laffite had an endless supply of ammunition and gunpowder, and he and his “Baratarian Red Shirts” were excellent at handling artillery and they knew the swamps very well. The “Baratarian Redshirts” were indispensable in Jackson’s winning the Battle of New Orleans. After the battle, President Madison pardoned Laffite and his men, but their old habits died hard.

In 1816, Laffite relocated to Galveston, Texas and sold his smuggled goods as far inland as St. Louis. In 1821, Laffite abandoned Galveston and disappeared in history. He supposedly left a journal stating that his men and he were treated shabbily by New Orleans and the United States government.

No one knows what happened to this man — speculation relates he was killed in a sea battle, drowned in a hurricane, was hanged by the Spanish, was murdered by his own men or died of disease. Without his men and him, Jackson would have lost the Battle of New Orleans. This “sometimes patriot” said, without him, the name Jackson “would have tumbled into oblivion.”

— While at the University of Rio Grande, I placed my students in the dry canal and acted as Gen. Jackson.