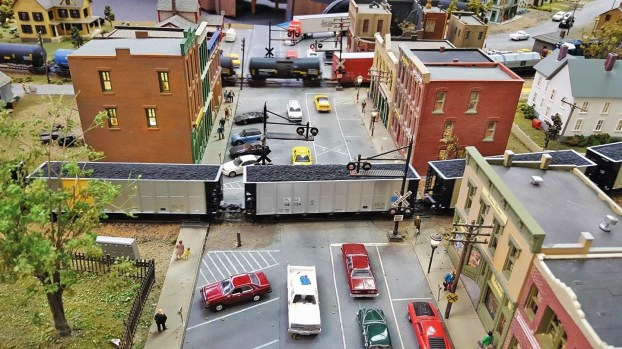 The 37th annual model railroad show by the Appalachian Model Railroad Society will feature a half dozen layouts on display and more than 75 tables of vendors. (Submitted photo)

Railroad Society gears up for show

ASHLAND — Model railroad enthusiasts and the public are invited to the KYOVA Mall next month for the 37th annual model railroad show by the Appalachian Model Railroad Society.

Carl Miller, of Huntington, said the group was formed in the 1950s and they are comprised of members from across the Tri-State, ranging from ages 14 to 85.

He said they had previously put on the show at Greenbo Lake State Resort Park in Kentucky, but had been forced to move venues after a fire damaged the facility a few years.

He said the mall proved to be such a popular venue for the event that they have stayed ever since.

The group also rents space at the mall, where they host meetings every Thursday.

Miller said the show will feature 75 tables of vendors, selling things such as model railroad equipment, books and railroad memorabilia.

“There will also be about a half dozen layouts set up,” Miller said, stating there would be 36-foot O-gauge and 34-foot HO-gauge displays.

With members having skills such as module construction, electrical wiring and track laying, the group says the only limit is your imagination.

They also point out that the hobby was popular with children until the 1980s and the rise of video games. They are hoping to spark a resurgence.

“It’s important to get the area interested,” Miller said.

In addition to next month’s show, the group also puts on a show in Huntington each fall the city’s civic center.

The group is open to all for new members, with annual dues of $30.

COAL GROVE — Lawrence County Developmental Disabilities is headed to the ballot in March to ask for additional funding to... read more