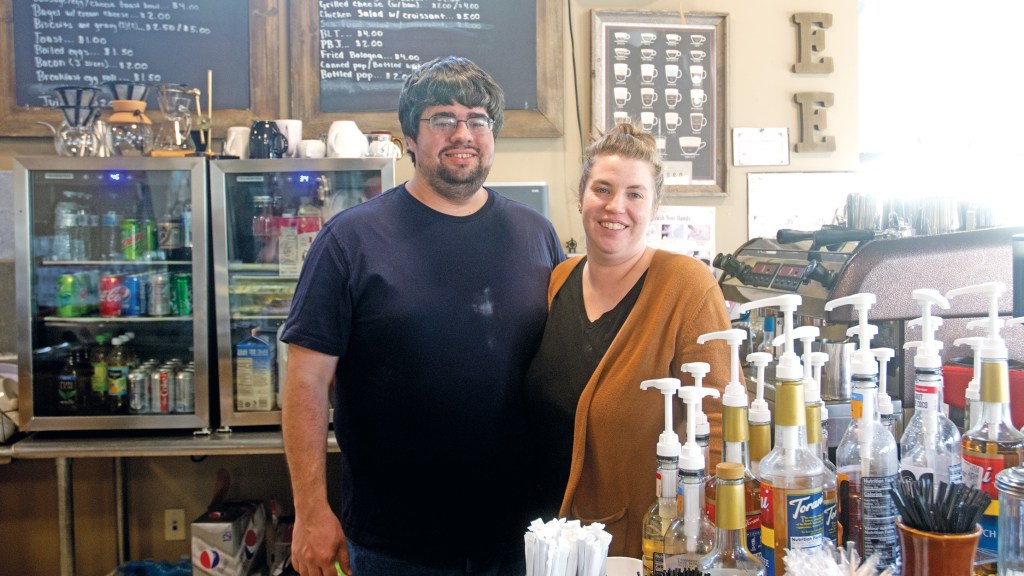 Aaron and Amy Dillon stand behind the counter of the coffee shop they recently purchased in the Ironton Transit Center. They are planning to change the name to Trader’s Café. (The Tribune | Mark Shaffer)

Aaron and Amy Dillon are expanding their trade. The couple owns Goblin Traders, a store for game enthusiasts and last month, they purchased Iron Town Coffee Lab and will be renaming it Trader’s Café.

Ironton Coffee Lab was started by Richard Fisher last January, in the transit building on the corner of Second and Vernon streets, to have something to do in his retirement. Aaron Dillon said Fisher wanted to enjoy his retirement and decided to get out of the coffee business and they saw an opportunity to have a business they’ve always been interested in.

“We always wanted to own a coffee shop,” said Aaron Dillon. “We toyed around with the idea of a coffee shop being part of the game store. And this opportunity came available and we thought it was as good a time as ever to try the coffee shop.”

While the signage hasn’t been changed yet, they picked the name Trader’s Café as a way of keeping a theme with both their businesses.

“We didn’t want to use the ‘goblin’ part of the name,” said Amy Dillon with a laugh. “This way, it is connected, but your 80-year-old grandmother will still want to come in.”

They both go back and forth between the two stores, but Amy Dillon runs the café more while Aaron Dillon is at Goblin Trader more.

“It depends who has the kids,” Amy Dillon said.

The last month has been hectic for the couple, besides learning how to run the café and raising their two kids, they also moved Goblin Traders from its former location on Center Street to a new location in the old AEP building on Third Street, next to Marco’s pizza.

“It’s been chaotic, we’ve done everything at once,” Amy Dillon said. “Everybody’s been asking what my one word for 2020 is — it’s ‘survive.’”

While it has been busy, it hasn’t been bad.

“It’s been going well,” Aaron Dillon said. “Every week, we are meeting people we never met before, so that means the word is getting out. As small business owners, we like meeting new people.”

Amy Dillon said they are working on expanding and refining the café’s menu.

“We’ve experimenting with smoothies,” she said. “It’s part of an effort to bring in everyone. Don’t like coffee? Try a smoothie.”

Right now, they have four flavors, strawberry, banana, peach mango and wild berry, all of which sold out quickly, so they are increasing their orders of that.

“Besides coffee, it is probably our number one seller,” she said.

Aaron said they will have seasonal flavors, with raspberry, strawberry and pina colada for the summer months.

They will still concentrate on the coffee.

“We are going to bring in our roaster,” Aaron Dillon said, adding they have to get approval for it and when they do, they will sell it wholesale. And they are working on infusing the roasted coffee beans with flavors. “A lot of coffee shops, including ours, uses flavor syrups to put in after you make it. We have a process to put flavor in our beans.”

That way, people can have a flavored coffee without having to add more sugar or carbs.

They are also going to bring board games to the café from the shelves of the Goblin Traders for people to come in and play.

“People can grab a cup of coffee, grab some dinner and play some games with their friends,” Amy Dillon said.

They are going to continue some of Iron Town Coffee Lab’s events like open mic night on Fridays.

“We may change it to more of a true open mic night and let people play in front of a receptive crowd,” Aaron Dillon said. “They can play guitar, sing or do poetry.”