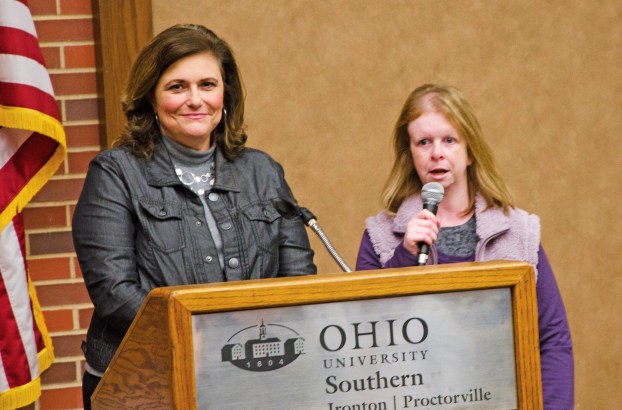 “I encourage everyone to vote for this levy,” Lauren Wade told the crowd on Thursday night at Ohio University Southern.

Wade, who receives services from Lawrence County Developmental Disabilities, was speaking at a town hall meeting hosted by supporters of a funding levy on the March primary ballot for the agency.

About 30 people turned out for the event in the Bowman Auditorium, where supporters made their pitch for the levy and took questions from prospective voters on the matter.

Julie Monroe, the superintendent of LCDD, introduced those who were there to give testimonials.

A 2.5-mil levy for 10 years for the agency was narrowly defeated in the November 2019 election. As a result, LCDD announced several budget cuts.

Supporters collected signatures to put a new levy, a 1.75 mil, five-year proposal on next month’s ballot.

In addition to Wade, two others shared how they said LCDD had helped them.

Brian Hayton said his son was diagnosed with autism at the age of two.

“The reason our lives were not shattered was because of LCDD’s early intervention services,” he said of the diagnosis.

He said parents of those with disabilities spend “many sleepless nights” wondering what kind of lives their children will be able to lead.

“LCDD and early intervention brought us hope,” he said. “So many families in this community need this hope. And they not only need it, they deserve it.”

Karen Reed has multiple children who receive services from LCDD. She said when her son was diagnosed with autism after displaying signs, it “wasn’t a shock” for her.

“It was more like a thank you,” she said. “Finally, we had answers. Now what do we do about it?”

She said she had attempted to enroll him in a public school, but it “lasted until noon on the first day.”

“The school didn’t know what do with him,” she said of her son, who was nonverbal at that age.

Eventually, he was placed in a special classroom in the public school.

“But I felt that wasn’t where he needed to be,” she said of the decision to enroll him at Open Door School, run by LCDD, as a freshman. “It was not right to just keep him in a classroom where he was just being babysat. He needed to be challenged and see what the world offered.”

She said she was “blown away” by the care he received at Open Door, where not only was he around students like himself, but “the faculty understood him. Everyone understood.”

She said, in addition to classes, he is able to do work at Open Door, regularly visiting Kroger, where he helps to collect food for a local pantry.

She said Open Door has taught him life skills.

On the issue of properties owned by LCDD, she said they were limited to Open Door and the LCDD board office in Coal Grove and the early childhood center in South Point.

“We have no property to sell,” Monroe said. “We are trying to utilize our space.”

She was also asked about salaries for staff and how they compared to public schools.

Monroe said they looked at both public schools and other DD agencies and went for a middle ground.

At the close of the program, Tim Nunnery, the director of communications and resource development for LCDD, encouraged anyone with questions to give them a call or to submit questions via their website.

The forum at OUS was one of two election-related events on Thursday night.  The Concerned Citizens of Burlington also hosted their Meet the Candidates event at Burlington Elementary, inviting those seeking county and regional offices on the spring ballot.

About 25 donors were scheduled to donate on Thursday for a blood drive in the Mains Rotunda at Ohio University... read more