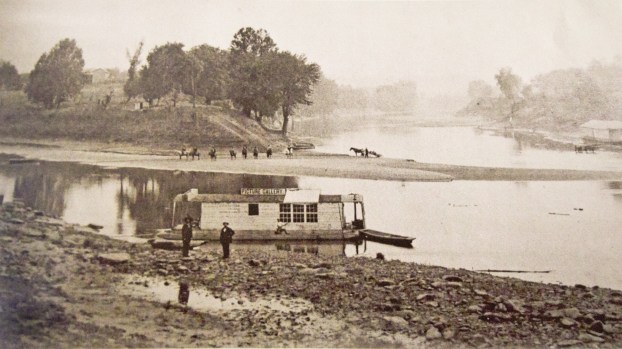 This photo, which hangs in South Point village hall, was taken from where the boat dock now is. Mayor Jeff Gaskin says it is from the latter half of the 1800s and is the view from the river toward Virginia Point across the river from Ohio. (Submitted photo)

Pointing to the future: South Point has grown into economic center of county

SOUTH POINT — It’s the southern most point in Ohio and overlooks the confluence of the Ohio and Big Sandy rivers and has centuries of history behind it.

The area that is now South Point had its first settler when William Ranger Davidson was rewarded with a tract of land in the area, which was part of a U.S. territory, for his service in the American Revolution.

“Ohio statehood was five years away and Lawrence County was 18 years away,” Mayor Jeff Gaskin said.

The earliest known grave in the village’s historic White Cottage Cemetery dates to the same year, he said.

Davidson was given land taking up about one mile on the river, where he built his cabin. While work was underway, he retreated at night to Virginia Point across the river in what is now West Virginia.

“And we still have Davidsons in South Point today, descended from him,” Gaskin said.

When South Point was incorporated in 1888, its first mayor came from that family.
Jerry J. Davidson served in office from 1888-1901, with a short interruption from 1894-1895 when Alfonse Soupene held the position.

Initially, the mayor’s term lasted for two years before a new election, something that remained in effect until the 1960s, when it went to a four-year term.

Gaskin said South Point was dry since its inception, and its first official prohibition law is dated to 1881. Residents had to travel elsewhere for alcohol.

“They had to go across, up and down the Ohio River to get what they wanted,” he said.

Gaskin said there are no records of government from 1903-1937, which he says could be due to the 1937 flood, which overtook towns all along the Ohio River.

Photos show that, by the 1920s, numerous cars and trucks began to appear on South Point roads.

South Point got its first fire truck in 1926, when its volunteer fire department was established. It was purchased new for $1,800. For comparison, the village purchased a new truck last year for $400,000.

South Point was first wired for electricity in 1937 and records at the Methodist church show it was lit with tall kerosene lamps prior to that.

In 1941, the Buckeye Ordinance Works was established on land between U.S. 52 and Solida Road, where hydrogen ammonia was made for military explosives. It opened shortly before the bombing of Pearl Harbor and served the U.S. military throughout World War II. Following the war, Allied Chemical purchased the plant, converting it to peacetime use and the production of chemical fertilizer ingredients. It was a significant employer in the county until major layoffs in 1968.

In 1950, the population had increased until South Point gained village status.

In 1957, $255,000 was spent on a water works project, installing lines in the village that are used to this day. Replacing the 60-year-old system is one of village government’s top priorities for the coming years. In 1963, its sewer treatment plant was built.

From the 1950s through the 1970s, the Ohio State Highway patrol maintained its post in South Point, before moving just outside village limits.

South Point marked its centennial in 1988, with the burial of a time capsule on New Year’s Eve of that year at the village park. Mayor Bill Gaskin presided over that event.

One of the longest serving mayors of the villages, he held the job from his appointment in 1976 by council until his death in 2010.

Five years later, his son, Jeff, would be elected to the job and is now serving his second term.

While South Point is home to numerous businesses and has seen much economic growth, Gaskin said most of its existing businesses are relatively new.

He estimates the oldest continuously-run business is town is the Wesbanco bank, which opened in 1961 as First National Bank, then changed to First Star and then Star bank, before taking its current name.

Recent decades have seen the arrival of The Point industrial park, hosting numerous businesses, which Gaskin said has increased the village’s tax base.

Harbison Walker International, a Pittsburgh-based refractories company, opened a plant there in 2018, bringing more than 50 jobs, one of the largest gains for the area.

The South Point middle school/high school complex opened, just outside village limits in 2007. The former high school, located within the village, now serves as the board of education office.

In February 2015, the village council and mayor’s office moved to their current location on Solida Road, in a renovated building that was a former doctor’s office. The council paid off the loan for the project last year.

This year, the U.S. Census has selected the village as home for its Area Census Office, serving 25 counties in southeast Ohio.

Gaskin said he is excited for the census and looking forward to seeing what growth has taken place.

“I’m exited for the future,” he said. I still believe South Point is one of the finest places to live in southern Ohio.”