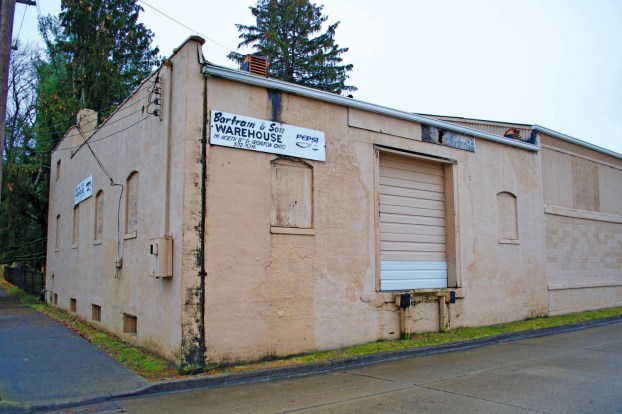 The old Ebert brewery stock house, located at Seventh and Railroad streets, was demolished in 1982. Three transient residents died in a fire at the building in 1981. The property was owned by Robert Griffith at the time of its demolition. (The Tribune/ File photo/Carol Kitts)

When people think of historic Ironton, the first things that generally come to mind are pig iron, football and the Underground Railroad. Something that played a part in creating a town rich in this history is beer. Ironton’s breweries furnished the working classes that built Ironton with common beer, lager and ale.

The earliest known brewer in town was Jacob Blessig, a French immigrant who emigrated at the age of 20 in 1844. By the beginning of January 1859, he advertised his new business in The Ironton Registry and offered common beer and lager for sale by the quart or barrel on Second Street

During this same time in 1859, a 22-year-old man named Leo Ebert left Bavaria in Germany to head to the U.S., where he would eventually end up in Ironton by 1861. Born into a family of brewers, he worked in breweries in different areas of Germany from the time he was 12. Ironton offered him the chance to rent a brewery of his own at the area of Storms Creek, where the old DT&I railroad bridge was located.

With $20 of startup capital, malt and hops on credit from Michael Goepper, he took up brewing in Ironton leading to the longest-running brewing operation in the city’s history.  Ebert brought his beer barrels into the city saloons by handcar on rail that ran next to his brewery.  After 18 months of brewing here, he saved up enough to purchase property from the Ohio Iron & Coal Co. on bond in March 1863. Located on the 700 block at Railroad and Center streets, the brewery remained at this location.

Peter Geiger from Wittenberg and Conrad Fronterol from Switzerland brewed for Hochgesang in 1870. At some point during the 1870s, Geiger ended up leasing the East Ironton Brewery and called it “Geiger, Loeb, & Co.”

Later, in the 1870s, a brewer named Jacob Meyer, a 36-year-old from Wurtenberg, Germany, took over operations, along with a man named Rothenberg for a short period of time. Meyer operated alone by 1876. Meyer still brewed in 1880, along with two other brewers boarding with him named George Riddle and Edward Herbert. It is thought that the East Ironton Brewery ceased operation in 1880, so it is possible he continued brewing at another location.

Hochegesang eventually turned to distilling fruit brandy and, by 1889, a map of Ironton shows the building that housed East Ironton Brewery called Lion Bottling Works. Something changed with Hochgesang’s fortune as the sheriff sold off part of his property in another location of Ironton in 1895. By 1900, his entire family lived in Dayton, with none of them working in the brewery business. Nothing stands today of the original East Ironton Brewery.

Leo Ebert had better luck and served as president of the U.S. Brewers Association from 1895-1897. Over the years, Ebert’s company operated on and off under the names Eagle Brewery, Leo Ebert & Co., Leo Ebert Brewing Co., The Ebert Brewing Co. and finally, The Ironton Brewing Co.  At its height, the brewery produced 13,000 barrels of beer a year. Ebert died in 1908. His son, Otto, assumed operations. By 1918 prohibition was inevitable. The brewery closed permanently that year. The only remaining structure from Ebert’s brewing enterprise is one square warehouse on the 8th Street side of the railroad, now known as Bartram’s Warehouse.

Smithsonian Magazine published a story in 2017 about microbreweries popping up all over towns again as places families and friends gather.  Some suggest the presence of a brewery indicates economic health. With a town rich in brewing history, here’s to hoping for fermentation again soon in this iron river town. Cheers!

Abby Kuehne is co-owner of The Vault Market in Ironton. She can be reached at abby@thevaultmarket.com.

For more stories on the history of Lawrence County, check out our 2020 Profile magazine, packaged with Friday’s edition of... read more