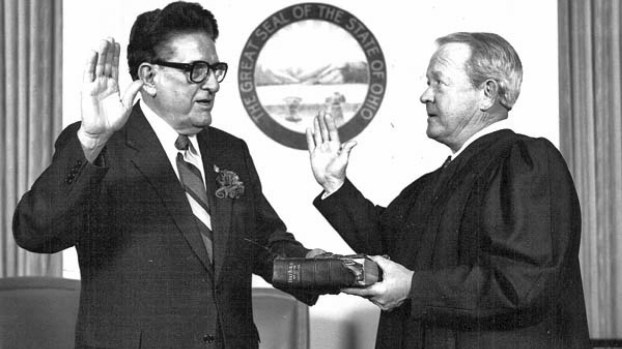 ‘A friend to everybody’: Oakley Collins’ legacy is strong in Lawrence County

One does not have to spend much time in Lawrence County to quickly realize Oakley C. Collins was a major figure in the area’s history and development.

The bridge crossing over from Kentucky to Ironton bears his name, while Collins Career Technical Center and the Collins Center at Ohio University Southern are named in honor of him as well.

Prior to his time at the statehouse, he served as principal of Windsor High School and he ended his career as superintendent for Lawrence County Schools before retiring in 1993.

The second longest-serving lawmaker in Ohio at the time of his death, Collins was known for his colorful personality.

Lee Leonard, of the Columbus Dispatch, summed Collins up in a tribute after his passing.

“A bear of a man, Collins had wavy black hair, naturally white teeth and hands the size of boxing gloves with fingers,” Leonard wrote. “He liked to whack people on the back and tousle their hair. More than one senator howled upon receiving such a good natured greeting.”

He said that Collins, a Republican, won the votes of many along the Ohio, including Democrats, and was master at gaining the favor of the people.

“It was said that Collins could dive into the Ohio River and shake three hands before he surfaced,” Leonard said of Collins’ campaign style.

He noted that Collins worked closely with members of the opposing party, including Democratic Speaker of the House Vern Riffe, in championing education.

Known as the “Father of Vocational Education in Ohio,” Collins, along with Democratic Sen. Oliver Ocasek, pushed strongly for primary and secondary education in the state.

Bill Dingus, the executive director and first dean of Ohio University Southern, remembers first meeting the senator when he was working as a school teacher.

Dingus said he took part in 30-40 of these trips as a teacher.

“So, multiple times a year, we would go and talk education and teacher’s salaries with him,” he said.

He said Collins’ background in education made him receptive to the needs of schools, and that he and Ocasek let school superintendents write a bill when it came to education legislation.

“We had a strong advocate with Oakley,” Dingus said.

He said Collins was close to Ocasek, despite the political divide, and that, when one party lost power, the other would become chair of the education committee.

“It really didn’t matter who the chair was,” Dingus said. “There was continuity.”

The two even roomed together and Ocasek would end up speaking at Collins’ funeral.

Dingus said it was a different time in politics and that something has been lost.

“People are so polarized these days,” he said. “It didn’t seem so partisan then. It was more civil.”

Working with Riffe, Collins was instrumental in the creation of Ohio University Southern’s campus.

Dingus said when it came time to name the school’s first building in 1985, the choice was easy.

He noted that another building on campus is named for Riffe.

“You also can’t overlook Vern Riffe,” Dingus said. “And there was much accomplished because of them.”

Collins’ son, Clark, who served as municipal judge for Ironton, recalls watching the legislature’s decision to name Ironton’s new bridge for his father and being touched.

He said his father’s constituent services and looking out for the needs of the area’s residents endeared him to voters.

“I don’t call him a politician,” Clark said. “That seems to be the popular term. But, to me, he was a public servant.”

“He helped everybody that asked him for help, “Annette Cooper, Clark’s secretary, said. “He could make one phone call.”

Clark recalled, when he was campaigning for his seat on the bench, he was approached by a man who was a doctor.

“He came up to me and said, ‘I really wanted to meet you,’” Clark recalled.  “He said, ‘If it hadn’t been for your dad, I wouldn’t have got into medical school.’ You run into those stories.”

Clark said his father kept a notebook on him at all times, in which he would ask residents to write down their name, number and the problem they were having. He would then promise to call them when he returned to Columbus.

“I don’t think the man ever had a hot supper,” Cooper said. “Because the phone rang over there all the time, and he would take every call.”

Clark said pages at the statehouse assigned to his father would complain of getting the “midnight shift” working with him.

“He would return his calls up through midnight,” Clark said. “And they’d complain about having to stay so late. But that’s the way he was. He was just very special. And I think the folks around here really appreciated him.”

One of those people was Betty Yaniko, who worked in Rock Hill schools as a librarian.

“A lot of people don’t realize everything he did as a senator and superintendent,” she said. “He was a great human being.”

She recalled always seeing Collins driving his signature white car, which she figured he went through several of over the decades.

“It slowed down, and you always knew it was him,” she said. “He would pull over and talk, and not just at election time.”

She said in Collins’ later years as superintendent, he was always helpful and informal in his dealings.

“If you needed certification renewed, he said to just drop it off at his house,” she said.

But, like many in the area, she recalls the senator’s personal generosity, which extended outside of political work.

She recalls a man who was in dire straits financially, and said that Collins hired him as guard at his family’s coal mine, even though there really was no need for the position.

She remembered another man who could not make ends meet and could not feed his children.

“A lady told him to use my phone and said, ‘See if Sen. Collins can help you,’” Yaniko recalled. “He told them, ‘I will be there tomorrow. Get a neighbor to watch the children.’ Then, he took them to the store and told them, ‘Get whatever you want’ and he paid for it. You don’t forget things like that.”

Clark recalled a similar story, when a man approached him at his father’s funeral.

“You could tell he was a farmer,” Clark said. “He had overalls on, and he apologized for that. I said, ‘Don’t apologize. He’d want you to be here.’ He had his kids with him and said, ‘I had to be here,’ and proceeded to tell me this story.

“My family was up against it one winter and had it tough,” Clark said the man told him. “I went to see your dad and he took me out into the field.  He said ‘Pick out one of the cattle,’ and I did.”

He said the senator told him, “You take that and have it butchered and use it for the family this winter.”

“And he said ‘That’s what got us through the winter,’” Clark said. “I’ve heard these over and over. There are so many of those stories — how he helped families out getting jobs. I’ve heard them over and over again, and it’s the generations down that tell me.”

Clark said his father also taught him valuable lesson about campaigning and winning over the people.

He recalls one election night, they were in the courthouse and he glanced over and saw the returns for one particular precinct on the black board.

“Decatur was our home ground, where the farm was and he grew up,” Clark said. “I happened to glance at Decatur and he had 425 votes and the other guy had 19.”

He said his father’s reply stuck with him.

“I knew who those 19 were and we’ll get them next time,” he said he was told.

“And that was his philosophy,” Clark said. “I learned a lot of lessons from him. And one is ‘There’s always a next time.’ You don’t burn bridges. You move on. He had that philosophy.”

He said another example of that came when he and his father were driving and campaigning.

“There was a farmer up ahead,” Clark said. “He was a red hot Democrat. Dad said, ‘Honk the horn, son.’ He gave a big wave and the guy waved back. And he said, ‘Son, we may get him next time.’ That was just his philosophy. He didn’t hold grudges. It was a winning formula.”

He said another was to focus on the positive.

“You run your own campaign and you run on your own record,” Clark said. “In all those years, he taught me that. And I think we were both pretty successful. He taught you so much, the right things. You really were blessed to have made his acquaintance.”

Collins was known around the capitol as a practical joker and Clark recalls one incident of his humor.

He said that his father kept a wind-up toy duck in his desk and, when one senator became a bit too long-winded and exceeded his time, Collins put the duck in the floor and sent it walking up the aisle.

He said his father campaigned nonstop (Cooper said it was “365 days a year”), and it came naturally.

“You have to remember when he was running back in those days, you didn’t have all this electronic media,” Clark said. “He’d put 100,000 miles on a car in a year and he’d have to cover all those counties. He believed in going to all those bean dinners, 4-H sales and things in each county.”

Yaniko said this was not limited to election years.

“He always had time,” she said. “No matter what. He never saw a stranger, and was a friend to everybody.”

Clark agreed with her assessment.

“He was always the same,” he said. “The day before the election, the day after the election. He loved people and that made it easy for him. He was a true public servant.”

For more photos from the life of Oakley Collins, see The Ironton Tribune’s Facebook page.

Follow the rivers: Ingles’ ‘Escape Route’ made her first white woman to walk through Lawrence County

It was the second year of the French and Indian War and the war would become a world war, won... read more