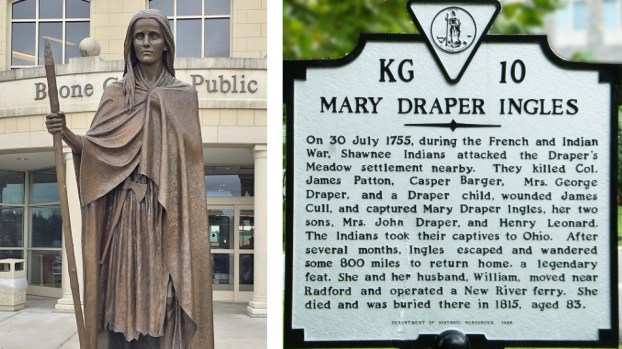 Follow the rivers: Ingles’ ‘Escape Route’ made her first white woman to walk through Lawrence County

It was the second year of the French and Indian War and the war would become a world war, won by the British.

However, at Draper’s Meadows, Virginia, a settlement of 10 English colonists, life was quite calm and peaceful until July 8, 1755.

William Ingles and John Draper, the husbands, hid while the Shawnee captured their families.

Mary Ingles was 23 years old and nine months pregnant. After burning Draper’s Meadows to the ground, the Native Americans forced the survivors to march westward on a route known as the “Captives’ Trail.” The hiding husbands thought they might be able to ransom the women and children.

As the prisoners headed west following the New River, Mary gave birth to a baby girl on the third day and resumed her march the next morning.

At the Kanawha River, not far from today’s Point Pleasant, the Native Americans had the two women boil brine for them at the salt licks. The Shawnee were headed to Lower Shawnee Town, or Scioto Town, today’s Portsmouth, which was founded in 1803.

Mary began to memorize the rivers, streams and landmarks as they left the Kanawha. Mary’s sister-in-law, Bettie Draper, had been shot in the arm by the Native Americans and was having difficulty keeping up.

The Native Americans would send Bettie to Chillicothe. One of Mary’s sons, George, was sent to Detroit, and the other son, Thomas, was sent west. Certain histories record that Mary never saw any of them again. Mary was kept with the Native Americans because she made shirts for them from a bolt of cloth they had. She kept her baby.

Mary and a woman from Pennsylvania, known as “the Dutch woman,” were sent to Big Bone Lick in today’s Boone County, Kentucky. This salt lick was 150 miles from Portsmouth in the Cincinnati area. History

does not know the name of “the Dutch woman” whom the Native Americans had captured in Pennsylvania.

Mary convinced “the Dutch woman” that they ought to escape. Mary decided to abandon her baby girl, since its crying would get them caught. They set out after stealing some blankets and tomahawks from the Shawnee. The Native Americans did not pursue them, thinking wild animals would kill them. If the Shawnee had recaptured them, they would have roasted them!

The route Mary Ingles followed was called the “Escape Route.” She told herself to follow the Ohio River to the Kanawha to the New River to Anvil Rock and home to Draper’s Meadows.

The women covered themselves with leaves at night, since they could not build a fire. They came to a cabin in ruins and found some corn. They looked for berries and nuts and resorted to eating the roots of shrubs.

A major problem was that Mary could not swim. Some of the streams that fed the rivers were too deep to wade so they would have to go upstream to get across — miles out of their way.

One night, “the Dutch woman” told Mary that one of them should kill the other for food. “The Dutch woman” attacked Mary and Mary got away and hid from her. Now, Mary was all alone and hoped her memory would take her home.

Mary saw much game, but could not kill the animals. She slept under rotten logs. Mary found an old canoe filled with leaves. She found a sturdy stick and crossed the New River, leaving “the Dutch woman” screaming at her to take her with her.

Mary was actually around 30 miles from home, but frost and snow indicated winter was only weeks away. Mary became very weak and her muscles knotted up. She was quite hungry, despite eating snails and worms.

As she came to the New River Narrows, she saw the steep cliffs and the water there was too deep to wade. Other humans would have given up at the “Narrows,” not Mary Ingles.

She peered up at Anvil Rock and there was no way around it. She lay down in the snow and said, “I’m too close. I won’t die.”

Anvil rock was 280 feet high. On a late afternoon in November, 1755, Mary somehow conquered Anvil Rock and stumbled into a cornfield with shocks of corn recently harvested.

Adam Harmon and his two sons saw her, but thought it was a Native American attack. They nursed her and then took her to Draper’s Meadows. It was Dec. 1, 1755 and Mary returned home along the “Escape Route” after a five-month ordeal.

Mary Ingles had walked, crawled, climbed and waded over 500 miles in around 100 days. She had overcome the Shawnee, wild animals, weather and “the Dutch woman.” People called her the woman with an iron will. When she returned to Draper’s Meadows, her hair had turned pure white.

Mary and her husband tried to buy their two sons back for many years, but George, the younger boy, had died. The older boy, Thomas, lived with the Shawnee and was purchased after 13 years for $150. Purchased at age 17, he had a difficult time adjusting to the “white way of life.” He became acquainted with Thomas Jefferson, James Madison and Patrick Henry. He was always moving his family westward. Thomas regarded his parents as strangers.

Mary lived to be at least 83 years old, had five more children and died in 1815. She sent men back the find “the Dutch woman.” She was brought to Draper’s Meadows, nursed back to health and returned to Pennsylvania.

John Draper, Bettie Draper’s husband, found his wife six years later. He bought her freedom, but she was not the Bettie he had married. She had been “indianized.” She acted, talked and lived like a Shawnee woman.

While walking the “Captives’ Trail” with the, possibly, Shawnee, Mary Ingles became the first white woman to walk through Lawrence County in 1755. Her “Escape Route” took her through Kentucky, West Virginia and Virginia. If Draper’s Meadows and the Ingles’ Family Settlement were still in existence today, they would be located on the Virginia Tech Campus!