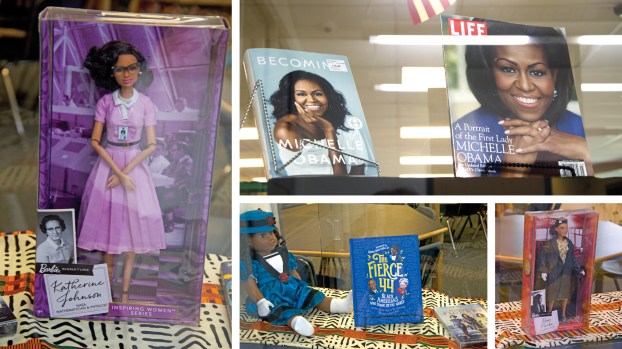 Organized by librarian Harriet Ramsey, the collection features items on loan from community members, particularly from Suzanne Howard, who attended the school and provides pieces from her collection each year.

Ramsey said the theme for this year was education, rather than past years, where sports and entertainment figures were highlighted.

One of those featured was NASA mathematician Katherine Johnson, a West Virginia native whose work was a key part of calculating early U.S. space flights.

A commemorative Barbie doll of Johnson, who died Monday at age 101, was included, as well as a copy of the 2016 book “Hidden Figures,” which tells the story of Johnson and two other African-American mathematicians at NASA, supervisor Dorothy Vaughn and engineer Mary Jackson. The book was also adapted into a film that year.

Ramsey said Johnson was also featured in the presentations of fourth graders on Monday in teacher Sarah Nuckols’ class.

‘A friend to everybody’: Oakley Collins’ legacy is strong in Lawrence County

One does not have to spend much time in Lawrence County to quickly realize Oakley C. Collins was a major... read more