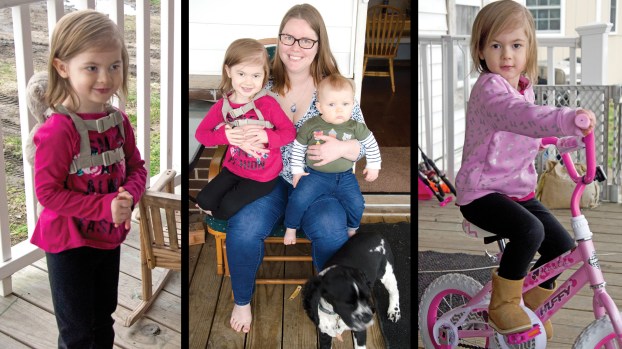 Leaping into a healthy future: Birthday has extra meaning for South Point child who is in remission from cancer

SOUTH POINT — After four years, Hannah Staton will have her “first” birthday today.

She was born on Leap Day in 2016 and today’s celebration will be an extra special one for her.

“It’s the first she’ll be able to enjoy because of everything she’s been through,” her mother, Carissa Staton, said.

At 17 months old, Hannah was diagnosed with a Rhabdoid tumor, which had progressed to stage four, and had to undergo two surgeries in her chest and spine to remove it.

Carissa said Hannah underwent radiation from November 2017 to January 2018  and underwent chemotherapy at Nationwide Children’s Hospital in Columbus from October 2017 to June 2018.

“It was neverending,” Carissa said of the weekly visits. “We made a lot of stays at the Ronald McDonald House close by.”

Altogether, there were 20 treatments, she said, and Hannah is now free of the cancer.

She still has to go back every three months for scans and also has to visit a chiropractor as she developed scoliosis from the treatments.

Carissa said her daughter was looking forward to the birthday party.

She describes her as “very spunky and demanding.”

“She knows what she wants,” Carissa said. “She’s silly and creative.”

Along with father, Josh, who works at Superior Marine and for South Point’s fire department, her family includes Hannah’s three older brothers and a baby brother.

“She’s the only girl,” Carissa said.

Hannah is a little shy when company arrives, but she opens up when showing her off bike and her dog.

Carissa said the community pulled together to rally for Hannah during her treatment.

She said this included a fundraiser at Casa Grande in South Point, two charity motorcycle rides and a karaoke night in Huntington, West Virginia.

“My husband’s work helped, by purchasing a vehicle that would withstand the travel back and forth to Columbus,” she said, noting they have since taken over payments, making the van theirs.

She was able to keep in contact with all of the supporters through a Facebook page, Hope for Hannah.

“We had a lot of help through our church and a lot of people reached out and donated money who were touched through Hannah’s page,” she said. “I don’t want to leave anyone out, but God made sure we had everything we needed.”

She said Hannah still has to undergo regular scans and they have to worry about after effects of the chemo, but they are optimistic.

“Hannah’s diagnosis turned our world upside down and, while we finally have had a sense of normalcy since about a year after chemo was done, it’s not over.”

But she says they are optimistic at her progress.

“We claim she’s healed and trust God has healed her,” she said.