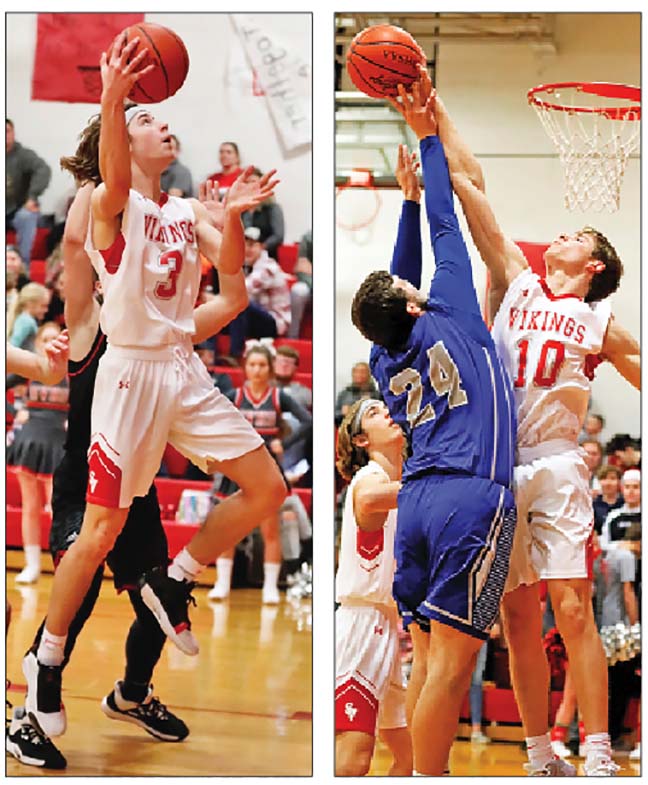 WILLOW WOOD — The city of Philadelphia has nothing on the Leith brothers and the Symmes Valley Vikings.
Although Philadelphia has been called “The City of Brotherly Love,” it’s the brotherly love between Jack and Luke Leith for each other, their teammates and winning that have led the Vikings to their first winning season since 2013-14.
Obviously, no one on the current roster was around for the last winning season.
The Leith brothers are a big reason for the team’s success which put a lot of pressure on them. Jack Leith is just excited about the winning season and how hard the team has worked over the past three seasons.
“We’ve definitely been paying our dues our whole careers. It’s just leading up to this season,” said Jack.
Jack Leith is a 6-foot-4 senior with a wingspan that is more suited for someone in a 6-7 or 6-8 frame. Junior Luke Leith is 6-2 and also has long arms.
The 6-foot-4 Jack Leith averaged 19.7 points, 12.2 rebounds, 2.1 assists, 1.9 steals and 3.5 blocks per game.
The 6-foot-2 Luke Leith averaged 10.6 points, 11.1 rebounds and 1.3 steals a game.
Their games are very similar as their statistics reflect including both currently shooting 53 percent from the floor.
And the brothers enjoyed the opportunity to play side-by-side.
“There was always a lot of pressure because we just wanted to be the best we could be. If it was rebounding, we did that. If it was scoring, we did that. If it was passing, we did that. We just wanted to do whatever it took to win the game,” said older brother Jack.
“It was fantastic. We’ve always wanted to do this. We’ve been playing together on our own court at home since we were 2-years old. It’s just been a lifelong dream.”
Luke Leith has another year in high school so he wants to treasure this season because it may be their last together. He also cherished being on the floor when Jack scored his 1,000th career point at South Point earlier this season.
“It’s really special. We rebound together and it was especially great getting to see him get his 1,000th point. It was off my missed shot so I’ll just say that one day that will be an assist,” said Luke.
“They mainly got on him so I would just sneak in the back door or when they double teamed him I was on the back block wide open so it wasn’t too hard. They usually doubled down on him. This year my scoring has been a little slower but my rebounding has been the same. I’m not scoring like last year but I’m starting every game.”
Vikings’ head coach Alvin Carpenter said the brothers are similar in their style of play but even more so in their desire to win and play team ball.
“When they start doubling down on Jack, Luke really stepped up for us a lot, too. He averaged 13, 14 points a game now and he averaged double digit rebounds, too,” said Carpenter.
“Jack has those long arms but Luke is about the same way. You don’t realize he’s that big until you see him standing by somebody and he sticks his arms up. They’re both that way,” said Carpenter.
Jack Leith has been a starter since his freshman season and Carpenter said his maturity and experience made him a team leader.
“Jack took over and put us on his shoulders and carried us the second half. And we’ve got some other kids who stepped up,” said Carpenter.
“He got a lot of assists. You didn’t realize what he had done after some games.
“He has those quiet games where you think he had an off night and then you look and he’s had 23 points, 18 rebounds, four blocked shots and five assists and a couple of steals. You just got in a habit expecting it to be there and you didn’t have to worry about it.”
The Leith brothers were not a two-man team and they are the first to admit it.
Carpenter pointed out that Drew Scherer — who averaged 11.7 points a game — along with Caden Brammer and Logan Walsh messed well as a team.
“We’ve got three or four other kids who have came along really well this year,” said Carpenter.
“Our first option was to get it down low, but if (the Leith brothers) didn’t have it, they were really good about kicking it back out. Everybody was getting into the same mind-set and it seems like it really helped out.”
Jack Leith agreed with his coach that the Vikings’ success was due to a team effort.
“It’s been pretty tough but we’ve always known this was how it was going to be. We all played really well together,” he said.
A tough loss ended the Vikings tournament run prematurely, but the season helped generate a lot of love between the Vikings and their fans.
And that’s something that the Leith brothers really love.

Jim Walker jim.walker@irontontribune.com ATHENS — It is the Division 3 district semifinals, but it might as well be the Ohio... read more