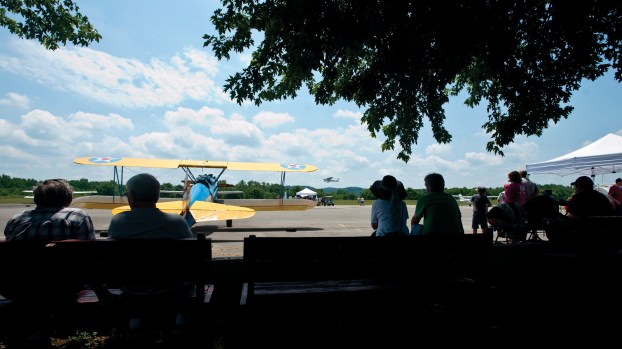 PROFILE 2020 – Stories of the Skies: Lawrence County Airport has more than 90 years of history

The Lawrence County Airport passed Its 90th birthday on Labor Day 2019 and, according the Federal Aviation Administration, it has been in continuous operation all this time.

There was about a year when there was controversy about the ownership with very little activity, but that seems to be resolved now.

The airport has been known by various names, including, Huntington Downtown Airport (when it was Huntington’s municipal airport), Huntington-Ironton-Chesapeake Airport, Mayes Field, Lawrence County Air Park and Lawrence         County Airport.

It was a pickup airport in the early days of air mail. The mail plane would fly low over the airport and pick up the mailbag with a rope and hook while dropping out the airmail bag for the area.

American Airways, which evolved into American Airlines, were the first commercial flights, flying DC-2s and DC-3s. They stopped flying here when they determined that they needed a paved runway to continue service. This was accomplished in the 1930s when the Works Progress Administration paved it, starting with a foundation of rock from the hill north of the airport. The paving project made the front page of section 4 of the Huntington Herald Advertiser on Sunday, April 4, 1937.

There have been several notable people that have passed through our airport.

At the time it opened, the manager was Capt. John Paul Riddle, who, along with T. Higbee Embry, had founded a flying school at the Lunken airport in Cincinnati, Ohio on Dec. 17, 1925. Lawrence County Airport was a satellite operation from Lunken. This Emby-Riddle flying school eventually evolved into the Emby-Riddle Aeronautical University. This is the most renowned flying school in the world, which has over 130,000 alumni. The primary founder was the first manager and instructor at our airport.

Another notable person was Howard Mayes, Sr. He was the manager from 1929-1949. Previously, he was the manager at Wertz Field in Institute, West Virginia, which was converted to a chemical plant that supplied butadiene to make rubber during World War II. He was a WWI fighter pilot who was shot down and crashed while on an observation flight in a Salmson 2 plane, along with his gunner who was killed. He crashed behind enemy lines and was cared for at a German hospital with serious wounds in his neck and leg from machine gun bullets. After seven weeks in the hospital, he was interned in a prison camp until the armistice on Nov. 11, 1918.

Howard Mayes, Jr. learned to fly in his teens, instructed by his father, Howard Sr. Howard Jr. had many adventures at Lawrence County Airport. which was known locally as Mayes Field. He was hired by United Airlines and stayed with them during his entire commercial career rising to vice president. Notable assignments included being attached to the Army Air Corps to fly cargo and personnel around the country during WWII.

Howard Jr. also holds the altitude record for young flyers in a light plane. It weighed only 436 pounds with a two cylinder engine and flew to 19,997 feet on  Labor Day in 1936, where he passed out when his oxygen ran out.

He regained consciousness at about 10,000 feet and landed safely. This same plane, an Aeronca C-2 N Scout, known as the flying bathtub, can be seen in the Experimental Aircraft Association Museum in Oshkosh, Wisconsin.

An altitude record for women in light planes was achieved at 19,423 feet altitude by Irene Crum who learned to fly at Mayes Field with Howard Mayes Sr. as her instructor. She flew the same plane, the Aeronca C2, as Howard Jr. flew later for his record.

She achieved the record flying out of the air field at Gallipolis on a hot summer day on Aug. 27, 1935. She went on to be a WASP (Women AirForce Service Pilots) during WWII.

These brave women flew new planes including bombers, fighters and cargo planes, sometimes directly off the assembly lines to the various fields around the country. She later instructed in Brazil, South America and Florida under the auspices of the United States Air Corps.

The airport is a valuable asset for Lawrence County. It has hangars for 31 airplanes and has been a self-sufficient property for several years. The local pilots maintain the equipment, which was purchased at no expense to the taxpayers of Lawrence County. This includes three tractors and a riding lawnmower, which are owned by the Tri-State Pilots Association. The grass has been cut by the local pilots for several years.

The house that Jacob Proctor built is owned by one of America’s most familiar voices. Jim Thornton, who is the... read more