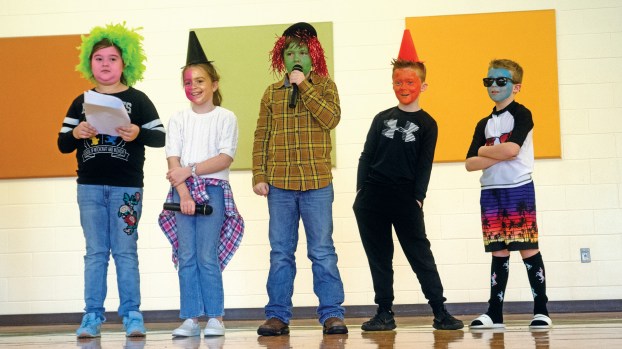 On Friday, third graders at Ironton Elementary School in Nikki Holt’s class put on a diversity program. Michaela Easterling, Sofia Sheridan, Eli Wileman, Roman Moore and Jackson Thomas played kids that no one wanted to play with because of their different appearances in the play “Color My World.” (The Tribune | Mark Shaffer)

On Friday, the Ironton elementary and middle schools got to see a play and speeches about diversity in America.

Third grade teacher Nikki Holt said the idea came from principal Joe Rowe, who had a similar program when he was at the high school.

“I said sure,” Holt said, adding that Rowe had picked her class to do the event after watching the class in action. “It is a great honor.”

Holt said she had several students research and come up with talks about where many Americans originally came from and they also worked on a play.

The play, called “Color My World,” came from Krista Martin who found the play online and directed the students in it. Martin is the City of Ashland finance director and used to work in Ironton city government.

The play is about two kids who are playing tag and are a little bored because there aren’t enough people to play any fun games. But when one of their friends brings along his five friends, the pair refuse to play with them because they look different. One has feathers instead of hair, two of them have cones on their heads and they have weird skin tones. After their friend points out they are being mean, they get together to play.

“The thing we want to get across most is that it is not what’s on the outside that counts most, it is what is in the inside,” Holt said. “We are always going to find people that look different than us and act different than us. Our hope is that the students not only hear that message today, but then they will take it out into the school, into the community, into their sports activities and practice what we teach them.”

Fiona Huang had several roles in the program including playing one of the kids who didn’t want to play with the other kids.

“It’s about difference and how you need to treat them good. We need to learn to treat different people nicely,” she said. “I had a lot of fun, the parts were really fun and it was just fun being in the play.”

Liam Philabon read a segment about Ellis Island and the melting pot.

“We did research to find all that,” he said. “I had fun researching it because, well, it was stuff I didn’t know and I like to learn.”

Reid Hunt was in the skit as one of the not-nice kids with Huang.

“The skit was really fun. I’m glad we did it,” he said. “A lot of people put in a lot of hard work to put this on. I just hope people get the meaning of the play.”

Rowe told the assembled elementary school kids in the morning run of the event that he was not only impressed with Holt but he was impressed with the students after watching them practice for over a week on the event.

“It is going to be an outstanding presentation,” he told the students. “They are going to give you their best.”

CHESAPEAKE — The village of Chesapeake is seeking input from the public on filling a vacancy. Council member Bill Duncan... read more