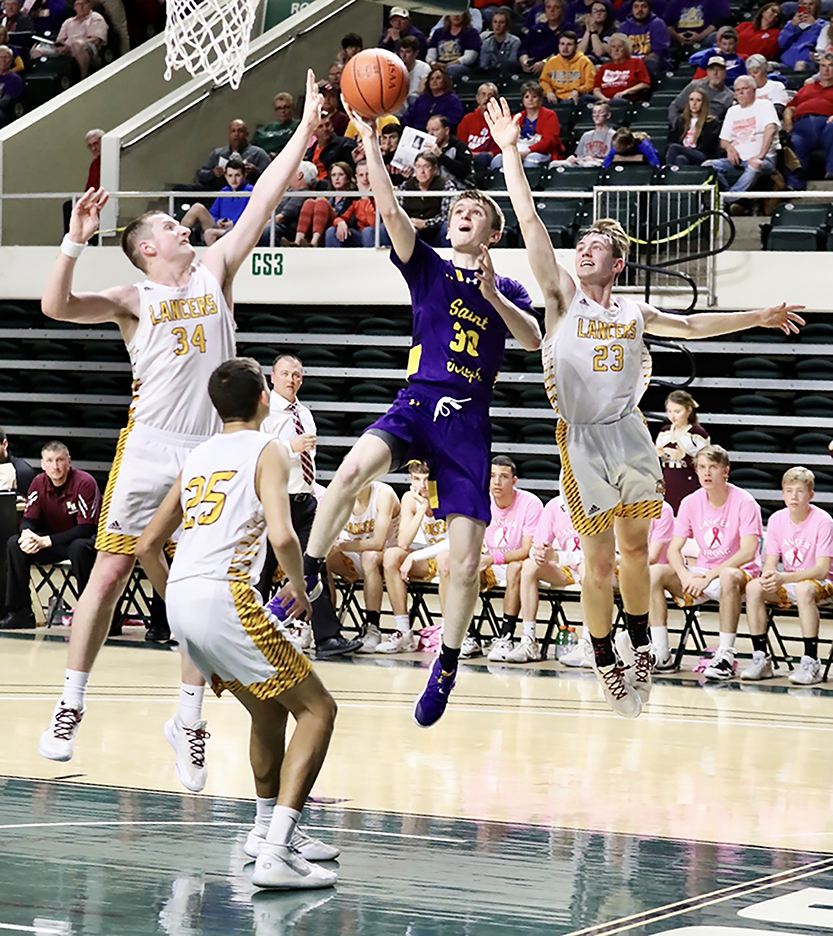 St. Joseph Flyers’ Jared Johnson drives and scores a key basket inside during Monday’s Division4 district semifinal game. The Flyers beat the Lancers 61-59 on the last-second shot and will play Peebles at 7 p.m. Saturday in the district finals at the Ohio University Convocation Center. (Photo By Tim Gearhart)

ATHENS — If you want to be the best, you’ve got to beat the best.
That’s the challenge ahead for the St. Joseph Flyers who must beat the top-seeded Peebles Indians on Saturday in the district championship.
Peebles is 21-2 and a heavy favorite against the Flyers who are 19-5 and just two wins away from the school record.
St. Joseph coach Chris Barnes knows Peebles is a great team but he doesn’t want his team to feel intimidated when they tip-off at 7 p.m. at the Ohio University Convocation Center.
“We just played hard and we have to play harder (against Peebles). We played them in the summer. We played everybody from our region,” said Barnes.
“We know what we have to do in order to beat Peebles. They’ve won 20 in a row. They’re a lot like Federal Hocking but more athletic.”
The Flyers used a last-second shot by Zach Roach to beat Federal Hocking 61-59 in the district semifinals.
The Indians are led by 5-9 senior guard Weston Browning who averages 15.7 points a game and 6-2 senior Hunter Ruckel with a team-high 18.5 points a game.
Peebles has a third player averaging in double figures with 5-10 junior Dawson Mills scoring 10.1 points a game.
The other starters are 6-3 junior Oakley Burba and 6-1 senior Kyle Lightner with 5-9 senior Alex Camp the top player off the bench.
The Flyers are led by the senior guard tandem of Zach Roach and Ryan Payne who average 16.9 points a game and 16.5, respectively.
Also in double figures is 6-2 junior J.C. Damron at 14 points. Damron also averages 9.0 rebounds a game.
The other two starters are 6-1 junior Jimmy Mahlmeister at 9.2 points a game and either 5-6 sophomore Matthew Sheridan and 6-foot Jared Johnson.
The top players off the bench are 5-9 junior Jackson Rowe and 6-4 junior Max Weber.
The winner will play the winner of Berlin Hiland and Malvern at 6:15 p.m. on Tuesday at the Convocation Center.