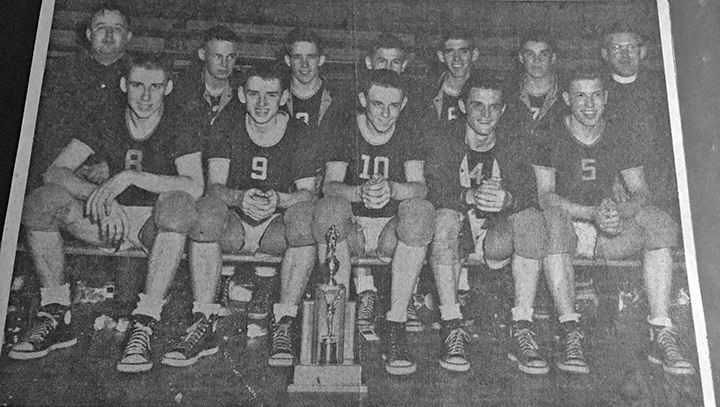 The St. Joseph Flyers have stirred some memories.
When the Flyers beat Federal Hocking 61-59 last Monday at the Ohio University Convocation Center, it was the program’s first win at the district level since the 1951 team.
The 1951 team has been called the best team in school history. The Flyers had their first winning season in 1950 and followed that with a school-record 21 wins the next season.
The 1952 team finished 17-5 which has been surpassed by this year’s team which is 19-5.
Ohio originally had just two classifications, Class A for larger schools and Class B for schools with enrollments of 126 or fewer boys.
St. Joseph has long had small enrollments including this year. In fact, half of the boys in the senior class are members of the basketball team. They are Zach Roach and Ryan Payne.
That’s it. There are four boys in the senior class. Only the girls had a better representation this season as all of the senior girls played basketball.
Those senior girls are Kaitlyn Sheridan and Faith Mahlmeister.
That’s it. Two. Yes, six members of the entire class.
But the Flyers aren’t making any excuses. They would just like to stand beside that 1951 team.
And what a team.
The 1951 team starters were Joe Gleichauf, Don Miller, Fred Lavender, Tim Rolph and Larry Dunworth. They were given the nickname “The Famous Five.”
Other team members included sixth-man Clarence Walker, Bob Fisher, Joe Swarts, Jim “Meat” Compliment, Charles “Buddy” Lawless, Jim Carey and Ed Fields.
The team was coached by the late James J. “Bear” Mains who later was the football coach and principal at Ironton High School and the first campus director of the Ohio University branch campus.
“That was a great basketball team. We were the scourge of Southeast Ohio. No one understood how those kids could move,” Mains once said about the team.
“Any of the five or six could bring the ball up the floor on the break and we ran the fastbreak. It was an enjoyable group. All Those kids were intelligent. They did what you asked and there were never any questions. We didn’t have any height. We had no business beating people like we did.”
The players attributed a lot of their success to having Mains as the head coach.
“Mr. Mains elevated us to a level of play far beyond our abilities and we had a lot of luck,” said Dunworth.
One story Mains told about elevating the team’s play came on a Saturday afternoon game at Coal Grove. The Flyers played slow and sluggish in the first half and found themselves behind.
Mains had a halftime motivator that did not involve yelling or spitting profanities.
“I had the manager go to the concession stand and get some potato chips, some pop and some hot dogs,” said Mains.
“The players were sitting there and I set it all down on the floor in front of them. I told them to have a picnic and have some fun in here since you aren’t having any fun out there. It really made them mad and lit a fire under them. We went out the second half and ran away with it.”
Lavender said Mains was a major factor in the team’s success, but he said it was a cohesive group as well.
“We were all lifelong friends. We liked each other and Mr. Mains was a great coach,” said Lavender. “We grew up playing together.
“The seventh-grade team was (Lawrence County) champs and there were there players on that team. The eighth-grade team was champs and there were two or three on that team. We were just the best of friends.”
The season didn’t start so famously as the Flyers lost 44-42 to Ashland Holy Family. But they bounced back with four lopsided wins before losing once again to Holy Family, 45-44.
A win over Windsor and then a 55-50 upset at Chesapeake got the team rolling.
“The first time we beat them 55-50, They were considered the power and beating them was the first time I realized we had a good team,” the late Gleichauf once said. “It was a tough place to play. They pinched you and tried to pull your shorts down.”
The Flyers won the Lawrence County tournament by beating Chesapeake 53-45 after losing to the Panthers 42-39 earlier in the double elimination tournament.
The two teams met yet again in the district with the Flyers racking up a 71-59 win.
The school’s first trip to the regional tournament had the team excited, but they lost to Corning 77-64.
“We did finally beat Ashland Holy Family. They beat us by 30 points the year before (1950) and one and two points in 1951. They always had several games in and we were coming off football,” said Lavender of a game in the 1952 season.
Miller led the Flyers with an 18.2 scoring average and was second team All-Ohio in Class B and first team All-County. Lavender was second team All-County and Dunworth honorable mention.