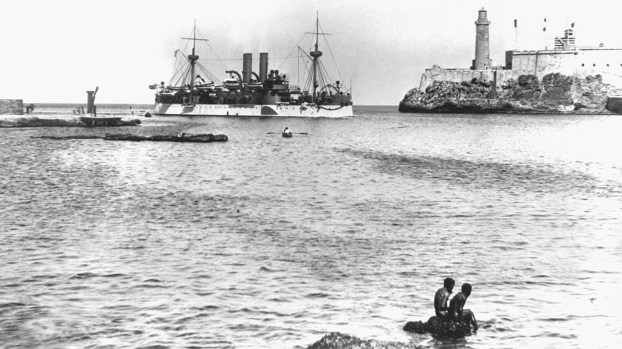 HISTORY LESSON: The Sinking of the U.S.S. Maine and Our Rise to Empire

When I was in the upper levels of elementary school here in Ironton, my teachers were insistent that we always understood the “three remember tragedies” — “Remember the Alamo,” “Remember the Maine” and “Remember Pearl Harbor.”

At the Alamo and Pearl Harbor, the destruction and violence were premeditated. What happened to the U.S.S. Maine in Havana harbor was a decades-long misunderstanding of the deaths and destruction brought on by two explosions.

In the 19th century, Cubans began to rebel against their Spanish overlords. During the 1850s, there was a movement to annex Cuba to the United States. The United States made offers to buy Cuba, but the Spanish would not sell.

Cubans fought the Spanish from 1868-1878 in the Ten Years’ War. Another revolt broke out in 1895. The United States would become involved in Cuba for a number of reasons. The United States had not been at war since 1865, except for the Indian Wars in the American West.

The two became involved in a circulation war. Their actions were characterized by the term “yellow journalism.” The term evolved from a comic strip figure, “The Yellow Kid,” who appeared in both newspapers.

This “yellow journalism” emphasized stories of sensational aspects, giving distorted pictures of news events. The two men and their newspapers presented false or exaggerated accounts of actions committed by the Spanish in Cuba.

Hearst whipped up support for war against Spain in Cuba. The war that resulted, the Spanish-American War, has been nicknamed “Hearst’s War.” It is said Hearst bragged that it cost him $3 million to bring on the war with Spain.

Hearst sent Frederic Remington to Cuba to draw pictures of the Spanish atrocities there. Remington telegraphed Hearst that there were no troublesome events there. Hearst telegraphed Remington: “furnish the pictures and I’ll furnish the war.”

Her plight was not improved since her father was a rebel leader against Spain. It was rumored that Cisneros would be sent to a penal colony in Africa or the Canary Islands.

Mrs. Julia Ward Howe and Mrs. Jefferson Davis appealed to the queen regent of Spain. Hearst sent Karl Decker, one of his reporters, to Havana to rescue Cisneros. When Evangelina Cisneros was brought safely to New York City, 120,000 people awaited her in the streets. She is known as “the Cuban Joan of Arc.”

In December 1897, in a private letter, Enrique Dupuy de Lome, Spanish diplomat at Washington, D.C., gave his opinion of President William McKinley. A spy stole the private letter in Havana and gave it to Hearst’s New York Journal.

It was published for all America to see on Feb. 9, 1898. De Lome described President McKinley as “weak and a bidder for the admiration of the crowd, besides being a would-be politician…”

The Cuban rebels in 1896 had been successful against the Spanish with their guerrilla tactics, but Spain would send Gen. Don Weyler y Nicolau to Cuba.

Weyler would be called the “Butcher” by American newspapers. He would implement his reconcentrado policy. He ordered the rural Cuban people to be herded into barbed wire reconcentration camps. They could bring no food, the government took their cattle and their houses were burned. The women and children in those camps died by the tens of thousands (a total of 200,000) due to improper hygienic precautions and starvation.

The rebels, termed insurrectos, were almost as ruthless as the Spanish. Caught in the middle were the Americans who had invested about $50 million in Cuba. The insurrectos set American sugar cane fields afire hoping the United States would be forced to intervene.

Serious riots in Havana in 1898 caused the United States to send the battleship U.S.S. Maine to Havana to insure the safety of American citizens and property in Cuba. On Feb. 15, 1898, only six days after de Lome’s letter was exposed, a terrible incident occurred which ended all hopes for peace in Cuba.

The explosion of the U.S.S. Maine was possibly the major cause for American entry into the Spanish-American War. Immediately, Americans accused Spain of blowing up the battleship. Some thought the insurrectos committed this violent deed to get the United States to intervene against Spain. Spain stated it had nothing to do with the explosion and felt its honor was greatly disrespected.

At 9:40 p.m. on Feb. 15, 1898, two explosions rocked the battleship and it sank into the Havana mud almost immediately with a loss of 266 lives out of 350 on board. Assistant Secretary of the Navy Theodore Roosevelt said that “the Maine was sunk by an act of dirty treachery on the part of the Spaniards.” The “yellow journalism” newspapers demanded war immediately.

In the latter years of the 20th century, Cuban communists believed Americans blew up the Maine as an excuse to fight Spain and take Cuba for itself.

The Maine’s captain, Charles Sigsbee, cabled to Washington that “public opinion should be suspended until further report.” Two official investigations were undertaken by the United States in 1898 and 1911. Their results stated that an external explosion (by a submerged or partially submerged mine) caused the deaths of American sailors.

The United States was partially responsible for the distress in Cuba. The Wilson-Gorman Tariff of 1894 placed very high rates on refined and raw sugar. Four-fifths of the wealth of Cuba was invested in sugar production. This tariff passed by Cuba’s chief customer caused a severe depression in Cuba.

This American tariff, Spanish misrule and “yellow journalism,” brought on the revolution in 1895. The explosion of the U.S.S. Maine took the United States on a direct path to war. A very popular slogan became widespread in the United States: “Remember the Maine! To hell with Spain!” My teachers never taught the second line of this slogan to us.

The war lasted less than four months. Our Asiatic Fleet of six ships destroyed a Spanish fleet of 10 ships at Manila Bay in the Philippines. Near Santiage, Cuba, American land forces defeated the Spanish at El Caney, Kettle Hill and San Juan Hill. The Spanish admiral was told to run the naval blockade of Santiage. All of Spain’s seven ships were also destroyed.

This war signified that the United States was a world power and possessed an empire. The Spanish flag had flown over the New World for 382 years, but now it was taken down. Many prominent Americans were anti-imperialists who wanted no more wars and felt it wrong to control the people who lived in these newly annexed lands. The American voters approved of our overseas imperialism by reelecting McKinley in 1900.

The Spanish-American War had cost the American people about $250 million dollars, but we received new lands. More than 250,000 Americans participated in the war, but American casualties amounted to less than 6,000 dead and 2,000 wounded. Of the 6,000 deaths, only 379 fell in combat. The rest died from disease, particularly yellow fever, and other causes. Resistance to Americans in the Philippines would not end until 1902.

The bloody insurrection in the Philippines lasted from 1899-1902 and really tested our military prowess there. Independence came to the Filipinos on July 4, 1946.

Cuba was given nominal freedom, but kept under American influence for many years. Spain had formed an official investigating commission after the explosions that sank the Maine, but the commission was not all allowed near the wreck. The Spanish commission stated that there had been an internal or accidental explosion within the Maine. However, the United States stood by the results of the 1898 and 1911 investigations.

On March 16, 1912, the stern (rear part) of the U.S.S. Maine was removed from Havana harbor and laid to rest in the ocean at 5:23 p.m. A grander funeral occurred in Washington, D.C. on March 23, 1912. Thousands turned out to witness 34 horse-drawn caissons take the remains of the Maine’s crew to Arlington National Cemetery.

In 1976, Admiral Hyman Rickover suspected a naval coverup from the 1898 and 1911 investigations. He found out that the Maine had fueled at Newport News with a type of coal susceptible to spontaneous combustion. The destruction of the U.S.S. Maine was proven to have been caused by combustible fumes in one of the coal bunkers that set off explosions in nearby magazines.

“Remind me what spring feels like.” That was my prayer this morning. Even though we have had a mild winter... read more