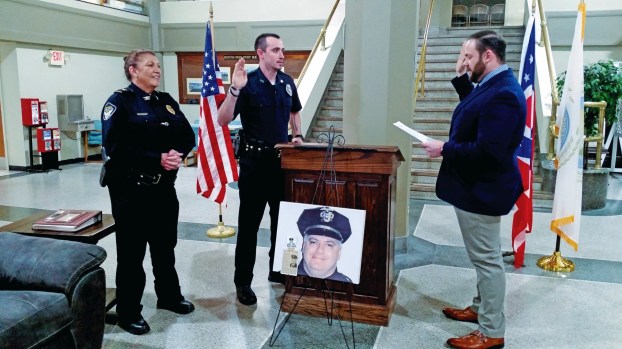 On Monday, Joe Akers was sworn in as the newest member of the Ironton Police Department by Mayor Sam Cramblit, as IPD Chief Pam Wagner looks on. Akers is the third generation of his family to serve in the IPD. His father, Jimmy Akers, seen in the large photo, retired from the IPD after 20 years. A smaller picture is of his grandfather, James Akers. (The Ironton Tribune | Mark Shaffer)

Following in the footsteps of his father, Jimmy and grandfather, James, Joe Akers was sworn in as the newest member of the Ironton Police Department on Monday during a very small ceremony in the City Center lobby.

“We are absolutely thrilled to welcome Joe Akers to our Ironton Police Department family,” said IPD Chief Pam Wagner. “This is kind of a family for Joe, his dad, retired from the department. His grandfather was also on the police force.”

Wagner said, as far as anyone can tell, this is the first time the department has had a third-generation officer.

“To my knowledge, we haven’t,” she said. “I’ve worked here for about 25 years, so unless it was prior to then, I think he’s the first.”

Akers graduated from Dawson-Bryant High School in 2015 and then went to police academy.

While he was at the academy, his father, Jimmy Akers died. The elder Akers served as member of the Ironton Police Department for 20 years and was also a member of the Lawrence County Drug and Major Crimes Task Force and also served on the Chesapeake, Coal Grove and Proctorville police departments.

“I loved it there, had a great time and met great people,” he said. In 2018, he joined the Scioto County Sheriff’s Department and was on road patrol.

He said he enjoyed working at both places, but when a position opened up at the Ironton Police Department, he knew he had to apply.

He said grew up around the department and already knows most of the officers.

“Pam worked with my dad and she’s known me since I was in diapers,” he said, with a laugh. “Can’t go wrong, she needs something done, I will do it. I feel great, I’m ready to start.”

His mother, Melissa Akers, was in attendance to see her son join the department.

“I could not be more proud,” she said. “I’m sure his dad is smiling down today.”

She said Joe grew up at the Ironton PD and always thought he would join.

“We knew it was kind of in his blood. He idolized his dad, always playing cops and robbers. So, we always knew this was the path he was going to take.”

RUSSELL, Ky. — Kentucky Gov. Andy Beshear said on Monday that he would like Our Lady of Bellefonte to remain... read more