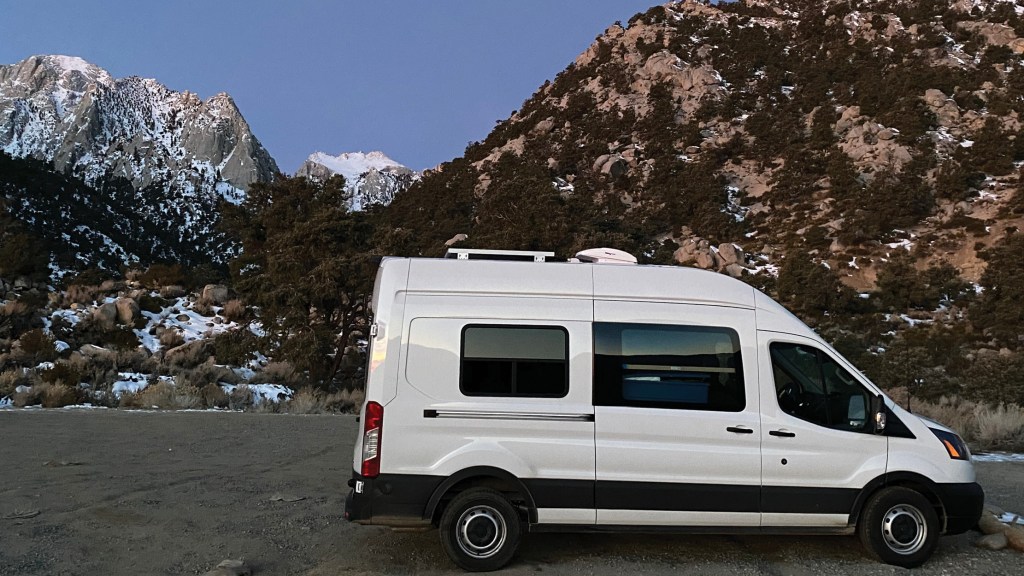 The Fayetteville, West Virginia resident is the owner and builder behind Bridge Bound Campers, a business he started two years ago that customizes regular vans, turning them into travel adventure vehicles. (Submitted)

Michael Williams has fond memories of the Volkswagen camper van he lived in for years after college.

“It was awesome,” Williams said of the bronze Westfalia. “[I was] living the dream…just kind of driving around.”

The pop-top van had a foldout bench/bed, a stove and a sink. It was Williams’ home for seven years while he worked for youth wilderness programs and traveled.

His beloved van died eventually, and Volkswagen stopped making vehicles like them altogether in the 1990s. To this day, Williams said, there’s not a replacement for the Volkswagen camper van.

“You can buy RVs, but [you] can’t really just go buy a camper van,” he said. “That was kind of the beginning of when people started to do custom van builds for themselves.”

Today, Williams is offering others the opportunity to live with the same kind of freedom the van gave him.

The Fayetteville, West Virginia resident is the owner and builder behind Bridge Bound Campers, a business he started two years ago that customizes regular vans, turning them into travel adventure vehicles.

He started customizing vans 10 years ago when he re-did a Mercedes-Benz Sprinter van for himself.

“It had everything I needed,” Williams said. “It had a propane system, a little stove, a solar panel, electrical and had a bed. It was cool… Of course, it was totally rustic. It wasn’t as nice as I do now but, yeah, it was totally functional.”

Williams decided to go into business after realizing how expensive it would be to upgrade from the Sprinter van with its two seats to something larger. He was looking for a bigger vehicle when his first child was born.

Williams at first thought his business model would be to offer a less expensive alternative. A rock climber himself, he thought he’d offer low-end builds for the fellow adventure types who come to the New River Gorge National River area to paddle its world-class whitewater or climb its mountains and live as rustically as he used to. But that wasn’t to be.

“I quickly realized right away that people just wanted the coolest stuff possible,” Williams said. “… It’s kind of like the dirtbag climbers are going to do it themselves and they’re not going to pay me to do it.”

His customer base has been diverse, he said, though most are rock climbers and paddlers.

“The difference is all these people are like my age now,” Williams said. “They’re like people that used to be dirt baggy, but now they have jobs and they’re in their early 40s and they can afford this type of thing.”

The price for customizing the vans varies depending on what customers want.

For $800, one paddler got a platform bed and a table put in her little van.

“[That’s] still a lot of money,” Williams said. “But for this kind of work, it’s not expensive.”

For $40,000, another customer got a solar powered electrical system, a backup lithium battery pack, an outdoor shower, a dry flush toilet, a standard stove/sink, a roof rack with awning and a gasoline-powered furnace with thermostat.

“A lot of the expense comes from components that go into the van,” Williams said. “It’s not just necessarily labor.”

Williams was raised a few places along the East Coast, but he and his wife settled in Fayetteville, partly for the rock climbing opportunities it offers.

“I love it here,” Williams said of the town. “I’ve been all over the country rock climbing in all these different towns. I just kept coming back here. It’s my favorite place to be. I love the small town vibe and it’s the best rock climbing in the country.”

Williams said he couldn’t have picked a better place than Fayetteville to own a business, even though some may hesitate to open a business in a state that continues to lose population.

“It’s so inexpensive to be here and there’s limited competition,” Williams said. “I’m paying very little rent for my space where if I was renting in Boulder, Colorado or San Francisco, I’d be paying like a million dollars a year for this building….

“The cost of materials is low and the cost of living is low so I don’t have to pay myself [as much]…So I think it’s kind of a no-brainer,” Williams said.

For now, Williams has little competition in his part of the world. Custom-van businesses haven’t caught on much in the Eastern United States, though there are a few, he said.

That’s made room for businesses like Williams’ to creep in, he said.

“So right now it’s kind of like a gold rush,” he said.

Caring for the community