Recycling halted because of trash dumping 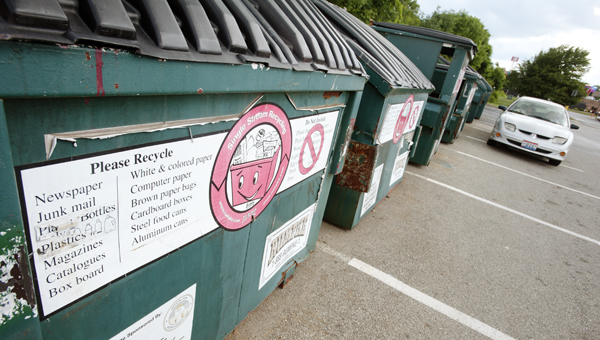 Effective next week, the Lawrence-Scioto Solid Waste Management District is pulling its 30 recycling containers from 12 sites in Lawrence and Scioto counties because of the abuse by people who are dumping trash and other household items that cannot be recycled.

“It’s sickening,” said Dan Palmer, LSSWD’s executive director, as he explained that this week, his supervisors pulled 85 bags of used kitty litter out of one container meant for plastic, paper and metals. “The contamination has grown exponentially. It sickens me to think people are using our recycling containers as a way of disposing of their garbage.”

In the past few weeks, the LSSWD has seen people dumping furniture, carpet, carpet padding, fencing, flooring and tires.

Currently, the waste district’s two supervisors, one for Scioto County and one for Lawrence County, have been trying to deal with the problem.

Normally, they are assisted by workers from the STAR Justice Center, but that ended five weeks ago because the center didn’t want them to be in public and chance being exposed to COVID-19.

That virus is also another reason that the LSSWD is pulling the recycling bins.

“We are concerned about the safety of our workers,” Palmer said. “People who are dumping these things are not wearing masks or gloves, so who is touching the side doors on the containers? I am worried about that and our workers have to take away the contaminated items, so it has grown so much that we cannot continue with this.”

Palmer said that the bins will not be available again until the state loosens its restrictions on non-essential services.

“I have notified the Ohio EPA of the situation,” Palmer said. “It’s a big problem across the state.”

He said that all Ohioans are under a stay-at-home order and people are not doing it.

“And recycling, at this time, is not an essential service. We are providing it, but because of safety issues, and the tremendous abuse, the containers will be pulled effective next week until further notice.”

He said that it is a temporary situation and once the stay-at-home order is lifted, the service will resume.