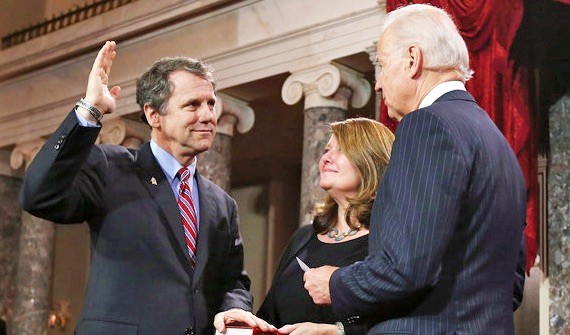 U.S. Sen. Sherrod Brown, D-Ohio, is sworn in by Vice President Joe Biden for a second term in the Senate in January 2013, as his wife, Connie Schultz, looks on. Brown endorsed Biden on Tuesday in the Democratic presidential primary. (U.S. Senate photo)

WASHINGTON, D.C. — U.S. Sen. Sherrod Brown, D-Ohio, has made his endorsement in his party’s presidential primary.

“Dignity of Work isn’t a slogan — it’s who we are, and how we govern; Joe Biden understands that. And as we face both a public health crisis and an economy in turmoil, we need a steady hand more than ever,” Brown said in a statement. “Joe Biden has the experience, the tenacity, and the empathy to lead in a crisis, and the hope to bring us together, and steer us toward brighter days ahead.”

Biden faces U.S. Sen. Bernie Sanders, I-Vermont, in the remaining primaries and has a significant polling lead over his sole opponent left from a once-crowded Democratic field. He leads Sanders in the delegate count, 1,217-914.

Ohio is hosting a nearly all-mail primary, with absentee ballots accepted, as long as they are postmarked by April 27. In-person voting will be limited to those with disabilities.

Ironton City Schools Grab and go meals containing both breakfast and lunch for a couple days. Monday and Wednesday at... read more