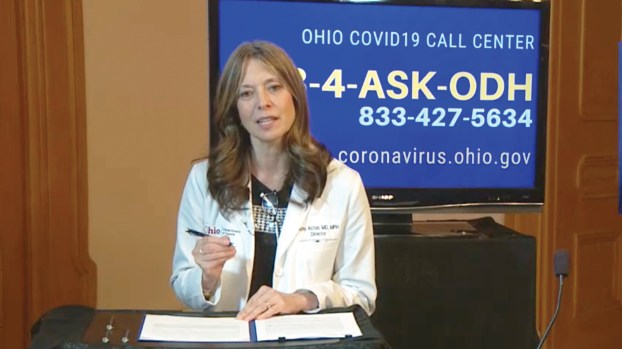 Dr. Amy Acton, director of the Ohio Department of Health, speaks at a news conference on the coronavirus pandemic in May 2020. (Screengrab)

Dr. Marvel of medicine comes to the rescue

Dr. Marvel of Medicine, Amy Acton, is front and center in the fight against the coronavirus in Ohio.

Her cape, a white lab coat, represents her mission to conquer the mayhem of planet pandemic. Committed. Calm. Composed.

“I have the honor of wearing this white coat, which I know has become a little bit iconic. But it became very clear to me that I’m wearing a symbol of all my friends and colleagues and your family members who are out on the front lines,” Acton stated at a recent press conference in Columbus, Ohio. “I’m thinking about you a lot — more than I can express because I’ve spent many years on the front lines and sometimes feel frustrated that I can’t just come in there and work alongside of you in doing this bigger picture planning. But this white coat represents all of you.”

“Even with my back against the wall — I don’t give up!” This quote by Captain Marvel (female superhero) sounds a lot like what Dr. Acton would assert.

Marvel’s superhero action sci-fi, set in the mid-1990s, follows the story of Carol Danvers (Brie Larson), a former U.S. Air Force fighter pilot, as she turns into a galaxy hero and joins Starforce, an elite Kree military team, before returning home with new questions about her past and identity when the Earth is caught in the center of an intergalactic conflict between two alien races.

Dr. Marvel of Medicine, an avenger to the virus villain, uses her knowledge, words and experience to educate Ohioans.

Amy Acton, MD, was appointed director of health for the Ohio Department of Health by Governor Mike DeWine in February 2019—the first woman to hold the position of Director of Ohio’s Public Health Department. Go Amy! A licensed physician in preventive medicine with a master’s degree in public health, Dr. Acton has more than 30 years of experience in medical practice, government and community service, healthcare policy and advocacy, academic and nonprofit administration, consulting, teaching and data analysis.

“Fear is not a choice. What you do with it is.”— Captain Marvel

Melissa Martin, Ph.D. is an author, columnist, educator, and therapist. She lives in Southern Ohio. Contact her at melissamcolumnist@gmail.com.