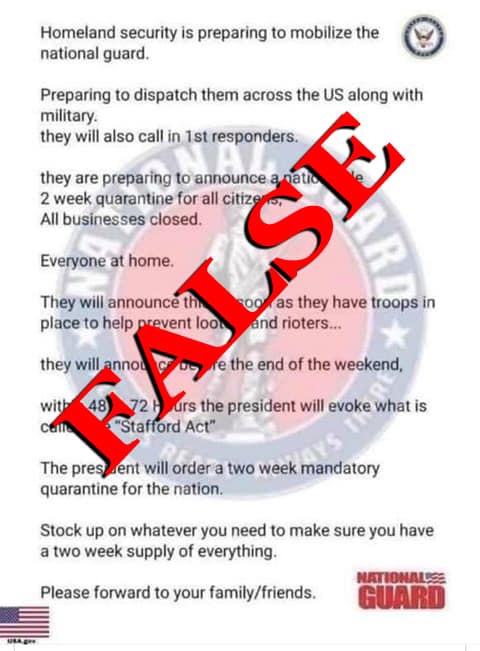 In the midst of members of the Ohio National Guard being mobilized to help with the coronavirus pandemic, they are having to deal with false rumors circulating on social media.

On Friday, the Ohio National Guard put out a public service announcement about a letter doctored to look like it was an official release with National Guard logos and a small American flag with “USA.gov” on it.

In a Facebook post, the Ohio National Guard was adamant in making clear the letter was not real.

“If you see this letter circulating on social media or out in the public, let us be extremely clear: THIS LETTER IS FALSE AND FAKE,” the post read. “There are bad actors out there specifically trying to mislead you, instill fear and make citizens scared of their National Guardsmen. Don’t let them.”

The letter, with many typing and style errors, claimed that “Homeland security” was preparing to mobilize “the national guard” and dispatch them across the U.S. along with military forces as part of a nationwide two–week quarantine that would close all businesses and force everyone to stay at home. And that at the end of the weekend, which would have been this past Sunday, the president was going to invoke the Stafford Act to “quarantine the nation.”

The Stafford Act is a real thing, it is invoked by the president to provide assistance to states during an emergency to help with cleaning up after disasters, such as when Hurricane Katrina struck in 2005.

Four hundred members of the Ohio National Guard have been deployed in some spots around the state to assist at places like food banks to make sure that people are being fed. The guard’s mission is to help the state in the times of emergencies when called on by the governor.

On Monday, Gov. Mike DeWine authorized the National Guard to help federal authorities in the Elkton Federal Correctional Institution in Columbiana County, where seven inmates have tested positive for COVID-19 and three inmates have died from the disease. The guard is there only to provide medical support and would not be armed or provide security for the facility.

“We are your neighbors, coworkers and friends and we leave our families to serve yours,” the Facebook post read. “Show your support for us by helping to combat these rumors.”

The fake letter post is one of many false reports circulating such as bridges around the state being closed, that the state police were pulling over people with out-of-state plates or that the police were stopping traffic across state lines.

COLUMBUS — Ohio Gov. Mike DeWine addressed the issue of overcrowding in the state’s prisons during the COVID-19 pandemic and... read more