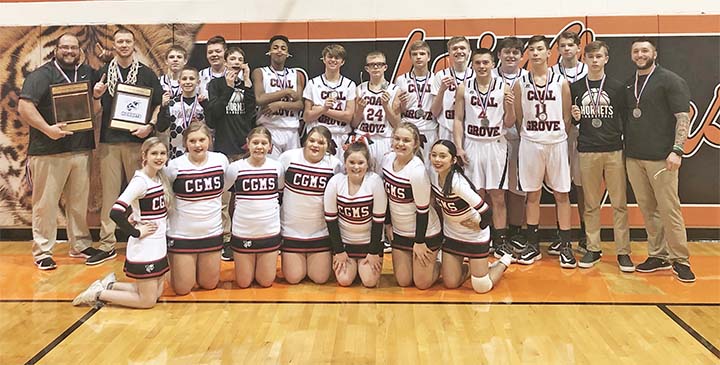 COAL GROVE — The Coal Grove 8th Grade Jr. Hornets had set their sights on winning a Championship in 2020, but after a rough 1-2 start the team needed a little refocusing and head coach Blaine Fuller was the perfect man for the job.
Coach Fuller may not be an Optometrist but he certainly got his team re-focused as he guided them to wins in 15 of the next 16 games en route to winning the Ohio Valley Conference Middle School regular season championship.
This was the 8th grade’s first title since 2013 and the school’s 11th MSOVC 8th grade basketball title.
The junior Hornets capped the season off by rolling through the 2020 MSOVC Tournament. The championship would also be coach Fuller’s first title as a head coach.
The team was led by the scoring punch of Owen Johnson and overall play of Will Davis. The remainder of the 8th graders consisted of Matthew McQuay, Steven Simpson, Whyatt Mannon, Sam Large, Jacob Stevens, Gavin Gipson, Wes Ruynon, Caleb Huff, Zach Delawder, Landon Roberts, Jacob Holmes, Nick Abrams, Aiden McMullen and Brady Lewis.
Along with Blaine Fuller, assistant coaches were Jacob Wells and Adam Fuller.

COLUMBUS, Ohio (AP) — Spring football was shelved because of the coronavirus. There is still plenty of work going on... read more