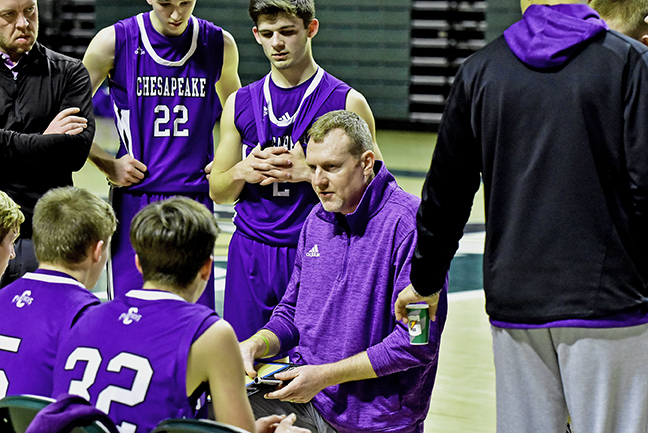 CHESAPEAKE — There are a lot of reasons the Chesapeake Panthers went 18-3 last season. The players were the biggest reasons, but Ryan Davis may have been the most valuable reason.
The Ohio High School Basketball Coaches’ Association recognized the job Davis did and named him the Division 3 Coach of the Year.
“It’s a nice recognition of the work the kids put in,” said Davis. “It was really fun to coach coachable kids. “
The Panthers were 18-3 in the regular season and finished 20-4 as they finished district runners-up.
In 19 seasons as a head coach, Davis has posted a 259-119 record with 11 sectional titles, four district championships, one regional title and a berth in the state tournament Final Four.
Davis was the Coaches’ District 13 Coach of the Year this past season.
The coaches also honored Tony Staib of Gahanna Lincoln in Division 1, Mark Triplett of Lima Shawnee in Division 2 and Chris Sautter of Columbus Grove in Division 4.
“Ryan did an outstanding coaching job this year, especially after five players transferred out of the program. Congratulations to Ryan who is very deserving of this honor,” said Larry Wilson, OHSBCA advisor.
The girls’ Coach of the Year honorees were Kettering Fairmont’s Jeremey Finn in Division 1, Circleville’s Steve Kalinoski in Division 2, Elyria Catholic’s Eric Rothgery in Division 3 and Cornerstone Christian Academy’s Lisa Stopp in Division 4.