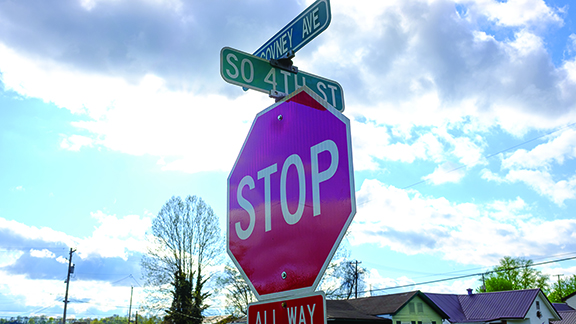 New ones added, some taken down

When driving along the streets of Ironton, it would be wise to make sure you pay attention to the stop signs. The city has put up a couple of new ones and taken some down.

There are new signs on Fourth, Eighth, Ninth and Tenth streets that were put up due to complaints by neighbors about drivers speeding in those areas.

“It’s all for safety reasons,” said Mayor Sam Cramblit. “We got a lot of calls from parents about flying through neighborhoods. And yes, we could put the police out there, but we have three officers on duty at a time. So, we would rather have stop signs up to control traffic.”
He said that until they put the signs up on Fourth Street, people “were treating it like a drag strip.”
He said that since they did this mainly for safety concerns, they took stop signs down around the old Whitwell School.
“If you have a stop sign every intersection, it’s redundant and causes issues for first responders,” Cramblit said. “So, we have tried to do that where we can, you can’t always do that.”
He said the city’s main concern is for the safety of the children in those neighborhoods.
“I know I couldn’t live with myself if a child got hit by a car,” Cramblit said. “The main reason is for safety purposes.”

Citing need for more medical workers, Ohio University will graduate nurses, doctors this weekend Due to the demand for medical... read more