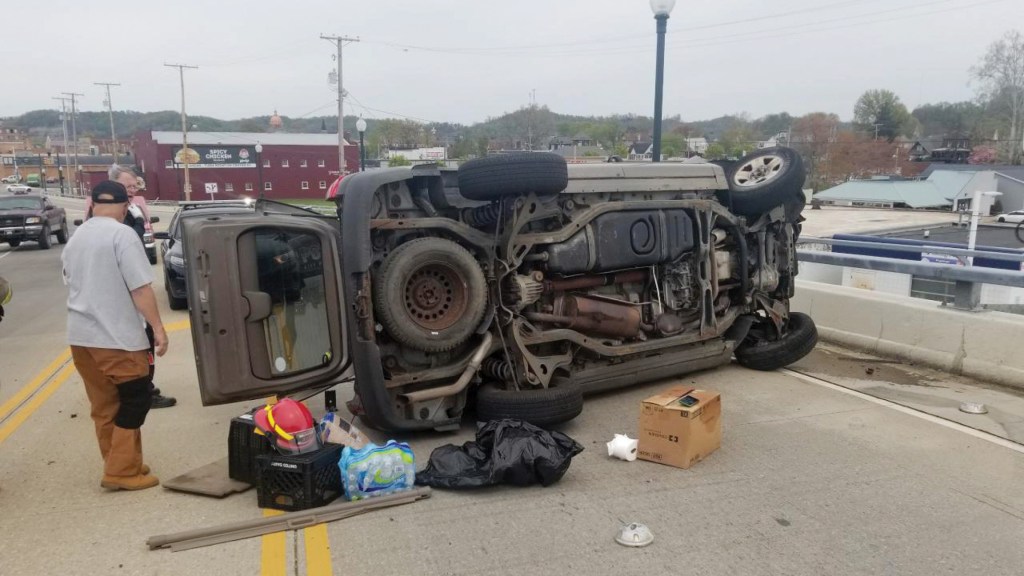 First responders were at the scene of an accident on the Oakley C. Collins Memorial Bridge on Friday afternoon after an elderly man flipped his SUV. (Submitted photo | IPD Capt. Joe Ross)

An elderly man was hospitalized after flipping his vehicle on the Oakley C. Collins Memorial Bridge on Friday afternoon.

The Ironton Police Department got a call about the accident at 1:19 p.m.

“We got a call about a man who had flipped his SUV on the Ironton-Russell Bridge. When we responded, we found an elderly man trapped in the van,” said Ironton Police Capt. Joe Ross. “He had hit the guard rail a couple times and then the van flipped onto its side.”

The IPD used one of their cruisers to keep the man’s Ford Explorer from rolling over again since it was on the downward slope of the bridge and unstable.

The IPD closed off traffic on the Ohio side and called the Russell Police Department to do the same on the Kentucky side. EMS was called to treat the man after he was removed from the vehicle by the Ironton Fire Department.

“With stopping the traffic and extracting him, it took about 45 minutes to an hour to get him into the ambulance,” Ross said.

The man, whose name was not released, was taken to a hospital for treatment. His condition was unavailable as of press time.

“He had multiple injuries from when he hit that guard rail on the bridge” Ross said.

There were no passengers in the SUV and no other cars were involved in the accident.