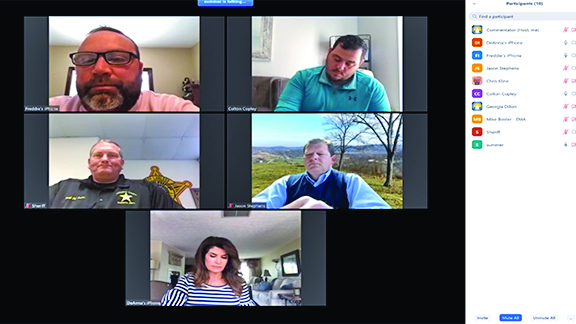 The Lawrence County commissioners continue to meet, although Tuesday’s meeting was done from their homes via Livestream because of social distancing and the state’s stay at home order.

Dillon said that the health department has been very busy as the pandemic has gone on.

As of Thursday, there were 19 cases in Lawrence County, mainly associated with outbreaks in the medical community in Kentucky and West Virginia. There have been no deaths and six people released from isolation. 591 test have been done.

Dillon said with the cases in Boyd and Greenup counties in Kentucky and Cabell County in West Virginia, that is a total of 72 cases in the Tri-State.

“That needs to be recognized as our personal community,” she said. “I want our citizens to be very diligent, on our mayor’s orders of staying at home. It is everyone’s responsibility for their families and for themselves to maintain social distancing and stay at home unless it is very imperative to get supplies.”

She said that only two of 17 of the people with coronavirus have been hospitalized and have since been released. She said that the others are being monitored by doctors via telehealth conferences.

She said the health department has gotten many complaints about crowding in places like Lowe’s and Walmart.
“But you, the citizens of Lawrence County, need to decide if it is worth the risk. If it is very crowded, go home.”

She said the next couple of weeks is important to keep the virus down and to remain home as much as possible.

Dillon said the others are doing well in self-quarantine.

Stephens gave an update on what is happening at the state level.

He spoke about House Bill 197, which was passed three weeks ago. The bill deals with COVID-19-related situations. such as extending voting for the primary to April 28 and making the voting mail in, instead of in-person at polling sites. He said the

Lawrence County Board of Elections has had a lot of requests for absentee ballots.
“Over 6,000 have been sent out at the last count,” Stephens said. “The last day to request those ballots is April 25, but I would request that earlier if you can.”

Information regarding requesting a ballot is available on the board of elections’ website, www.boe.ohio.gov/lawrence/.
The ballots have to be postmarked by April 27.

He said there are several provisions regarding schools which empowered superintendents to deal with continuing education while everyone was required to stay home.

It also authorized funding for take-away meals for students while school cafeterias are closed during the school year and into summer.

Another provision in the house bill allowed meetings of government bodies to continue, and be legal, as long as they are broadcast online. Under normal circumstances, the meetings are open to the public, except for executive sessions to discuss personnel or contracts. With social distancing required to lessen the spread of the coronavirus, the state now allows the meetings to be held online as long as they are broadcast to the public and it be a legal meeting.

Stephens commended the county for getting the technology together so they could all meet from various locations and talk in real time, although he said with five people on the screen at the same time, they “kind of looked like the Brady Bunch a little bit. But it does count as an official meeting.”

He said having the meetings online is important because no one knows when something important is going to happen.

Stephens said the Ohio legislature does have a committee working on when they can re-open non-essential business and what the situation has to look like before they can do that.

Lawless said that operations at his office are still “plugging right along.”
“Everybody is still working, we are still taking calls,” he said.

He said they are continuing to keep numbers in the jail down and that as soon as state facilities open back up, they will be shipping out some inmates.

He said that he wanted to make sure the public was aware of all the first responders still working.
“I want to say how proud I am of the sheriff’s office, of all first responders,” he said. “We haven’t stopped a bit. Not only law enforcement, but EMS and fire, you get a call and they are running to it” with the protective gear that they have since first responders have to be hands on in their interaction with the public and “I am extremely proud of them.”

Clerk of Courts Mike Patterson had the commissioners to tell the public that the office hopes to return to normal but they can still take care of things like titles through the mail.

Judge Andy Ballard said that last week, that all the courts got $50,000 in grants to teleconference hearings at both the jail and the juvenile center.

“And that was at zero cost to the county,” commissioner DeAnna Holliday reported. “So, we are very excited for our court system.”

EMS director Boster said he begins his day by looking over the COVID-19 statistics from the state to see how the pandemic is trending.

Boster said they need to know as planners what the trends are locally and worldwide, so that as emergency planners, they can prepare for the future.

He said most of the emergency planning is done virtually as much as they can.

“We are very fortunate to have a wonderful team,” he said and asked that citizens keep the first responders and health professional in their prayers since they are coming in contact with people who could have, or do have, the coronavirus. “We need to continually lift them up with our prayers.”

He said that they continue to search and find protective gear to supply the first responders.

Boster said that information coming out from the county goes through him, Dillon and Holliday and is put on the county website, so that the public is getting the most accurate information.

Lawrence County libraries to remain closed until at least May 5