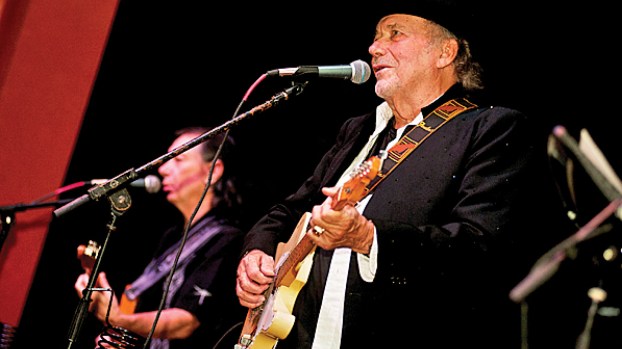 NASHVILLE, TENNESSEE — On paper, Bobby Bare’s album, “Great American Saturday Night,” should have been a surefire hit in 1978.

The latest addition to a run of successful albums he recorded with legendary songwriter Shel Silverstein, it had all the ingredients for something a recording label would be thrilled for and rush out.

But, due to the politics of the music industry, the work ended up in a vault and was considered lost…until Friday, when it finally saw the light of day.

This week, Bare, 85, a Country Music Hall of Fame member and Pedro native, spoke with The Ironton Tribune about his new release….42 years in the making.

At the time of recording, Bare was coming up on the end of his contract with RCA records, following a series of collaborations with Silverstein, including “Legends, Lullabys and Lies,” his most acclaimed work.

“The album was the last thing I had to turn in, before I either re-signed or went somewhere else,” Bare said. “Shel and I finished it up and I turned it in. I said, ‘I have an offer to go to Columbia Records for a whole lot of money.’”

He said the record label did not react well to the news.

“The head guy head of RCA said, ‘If you leave, this album will never see the light of day. We’ll bury it so deep.’”

Bare said that was enough to make the decision for him.

“I got pissed and said, ‘Well, I just decided I want to leave, because I don’t want to work with somebody like you.’ Because, when I signed with RCA, I signed with Chet Atkins. He was my mentor, my hero and stayed that way all his life.”

He said the executive followed through on his threat.

And there the album remained, in the RCA vault for more than four decades.

“Sony bought up all of all of Columbia and all the RCA Victor stuff,” he said. “When I saw they did that, I talked to a friend of mine at Sony and I told my manager, ‘There’s a completed album that Shel and I did that’s really good. It’s buried up in all that stuff. If you get lucky, you might find it.’”

He said it took a little time, but the work was located. 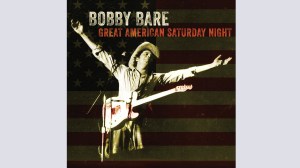 Accompanied by a fired-up crowd, the album opens with Bare proclaiming, “All right, welcome to the great American Saturday night — the moment you’ve been itching for, switching for, hopefully, breathfully, anticipating for all week long!”

Featuring Silverstein’s clever lyrics and spoken intros by Bare, the album centers around a theme, he said.

“Well, the concept was the American mentality on Saturday night,” Bare said. “You work all week and then there’s Friday night and then Saturday is the big night,” he said. “The concept is what people think and do when Saturday rolls around.”

The album is a hybrid of studio and live work. Bare said they began work in Nashville’s famed Studio B, and it was the last recording made before that facility closed. Then, Bare and Silverstein took things to Music Row, where they unveiled the songs live to a crowd of friends.

“We played the songs for everybody and it’s their response to the album,” he said. “All the secretaries and executives, and we had a few stars there — Dr. Hook was there, and I think Waylon was there. Dr. Hook is singing with me, doing harmony on one of the songs, ‘Someone to Talk To.’”

Bare said, for the 2020 release, they did not change a thing and the album was released as is, free of any remixing.

The album, which is Bare in his outlaw country prime, is loaded with the humor of Silverstein, who died in 1999, a few off color jokes and some tender moments.

“All these songs — they’re meaningful even now,” Bare said, citing the environmental themes of “Someone to Talk To.”

“I think Chet had gone to the Playboy club in Chicago and did a show,” Bare said. “He met Shel before me and then I met him at Chet’s office.”

Bare said he had been aware of Silverstein as a songwriter for several years.

“I’d heard his songs,” he said. “I had been touring Europe and I heard Marianne Faithfull’s recording of ‘The Ballad of Lucy Jordan,’” he said. “It was such a monster hit in Europe, and I loved that song. I had no idea Shel even wrote it. And the song ‘Time’ — I heard Burl Ives sing that back in the early 1960s.”

He describes him as a man with many talents.

“He did so many things so well,” Bare said. “He wrote children’s books and he’s still right next to Dr. Seuss with those — like ‘The Light in the Attic’ and ‘Where the Sidewalk Ends.’ All those, plus the first thing he wrote was a song about ‘The Giving Tree.’ It was huge and he wrote that and I recorded it.”

While Bare said he believes all of his albums have now been accounted for, he recalled one special recording that is still left to hear.

“There is one thing in there — I just flashed on it,” he said of the vaults. “When they closed down Studio B, when we did this album.”

He said it would have been the last recording in the fabled facility.

“Studio B is a very famous studio,” he explained. “It’s a tourist thing now, but it’s where Elvis, Jim Reeves, the Everly Brothers and those big hits were recorded. I went in there one day and Little Richard was recording in it. But the one thing they have in the vault that I just now remembered is of me, Shel, my friend Bill Rice and Chet Atkins and it’s the four of us singing ‘Auld Lang Syne’ to Studio B. They have that recording there someplace. We were singing because that was it. It was closed after that. It was a magical studio. It’s where I cut all my hits.”

“Of course, he couldn’t sing,” he said with a laugh. “He screeched when he sang. And he knew it.”

In addition to Faithfull’s recording, “The Ballad of Lucy Jordan” was recorded by Dr. Hook in the 1970s and then Bare released his own version in 2004.

He spoke about how Silverstein’s songwriting adapts so well to such a variety of genres.

— “Great American Saturday Night” can be purchased on CD at www.BobbyBare.com. Autographed copies and merchandise bundles are also available.

An elderly man was hospitalized after flipping his vehicle on the Oakley C. Collins Memorial Bridge on Friday afternoon. The... read more